Donald Sterling Does Not Belong in the NBA. Keys to Getting this W. Predictions. LET'S GO WARRIORS!

* Why are the Warriors not on KNBR 680 for a PLAYOFF game? I can't wait for the Warriors to find a non-San Francisco Giants propaganda machine for their radio home!

The Warriors find themselves down 1-2 in a hole that seems bigger than just 1 game. I know it's hard to fathom after the Game 2 40 point blowout and the painful Game 3 close loss, but the Warriors are just 1 win away from tying this series. It ain't over yet.

While the 2014 NBA Playoffs have been pretty superb so far, there's one unfortunate off the court story that's dominating the headlines. It deserves plenty of ink...

Donald Sterling Does Not Belong in the NBA

Truth be told, I have never liked this guy. Before the Chris Paul gift from Commissioner Stern, it was pretty clear that Donald Sterling both did not care or have a clue about running a winning franchise in the NBA. His ownership was an embarrassment. He was essentially Chris Cohan South. But the thing that bugged me the most about this guy was that he was the ultimate loser off the court.

Dig into the GSOM crates from 2006 and you won't be surprised about his recent recorded racist remarks to his girlfriend (TMZ):

It's sad that Sterling's racist words are getting Page 1 treatment across the mainstream media, when it's really his actions from a position of power that are the most consequential. Institutional racism might be boring to cover and doesn't have the same sensational effect as some ignorant sound byte, but it is what really matters.

Look, there's losers who have dumb racist attitudes and beliefs all over the world (overt racism), but what really matters is when these losers are in positions of power and use their power to hurt people politically, financially, and socially in ways that really matter behind the scenes (covert racism). Unfortunately, Sterling is one of these losers with that kind of power.

Props to Charles Barkley for making this same point very clear on Inside the NBA the other night.

If somebody wants to be racist, that's all right. That's their thing, but when you're in a position of power and you can take jobs and economic opportunity from people that's what crosses the line.

See: Watch the 'Inside the NBA' crew on Donald Sterling

Barkley demanded that new commissioner Adam Silver suspend Sterling right now. I don't think that's enough. This loser should be kicked out of the league for good.

Also I know it would never happen in this day and age of mostly out of touch multi-millionaire athletes, but as a person of color and frankly as a human being, I would have the ultimate respect for both Warriors and Clippers players (Black, White) if they raised a fist up in the air in unity at some point in the game. They have a national stage on ABC to make a statement. 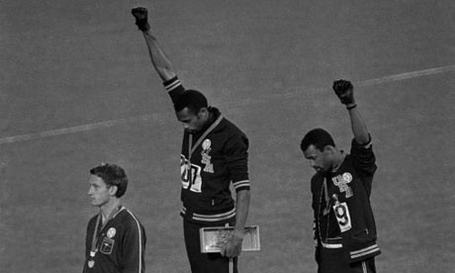 Shoot, I would love to see the Oakland crowd do this together as well. We are one of the most diverse places in the entire world. If we can show the world that there is NO ROOM FOR RACISM here in the Bay Area, that really means something.

Thanks to GSOM reader skyywise for The Message for the Roaracle crowd: An Open Letter for Anti-Sterling Crowd Cheers During Game 4

Keys to Getting this W

Now back to basketball...

It's time to give up on the starting 5 of Stephen Curry, Klay Thompson, Andre Iguodala, David Lee, and Jermaine O'Neal against this Clippers team in this playoff series. I do think that's a very good starting 5 and I have nothing but respect for Lee (who has been under appreciated in his Warriors tenure) and O'Neal (especially for his solid contributions at this stage in his career), but not against this Clippers team. DeAndre Jordan and Blake Griffin are just a terrible matchup.

The Warriors need to take a page out of Don Nelson's WE BELIEVE book and go ultra-small. Run, gun, and fun. It's time to try some very exotic lineups loaded with the Triple S:

The main rotation should be Curry, Thompson, Iguodala, Draymond Green, and Harrison Barnes. X-factor Steve Blake has the passing and 3pt shooting ability to give the Warriors some critical minutes here. Another 41 point outburst (well, 12 points would do) from Jordan Crawford would be fantastic.

Nellie would do this- no question. Will Mark Jackson?

GSOM co-founder Fantasy Junkie and I were in the People's Section to watch Game 3. We could not believe the horrendous shooting display from the Dubs. For most of the game this squad featuring the Splash Brothers shot in the single digits percentage-wise behind the 3pt line. That's just not going to get it done fellas. Me thinks it was a fluke and the Splash will be back in Game 4. I don't think the Warriors need to do anything here other than just keep shooting.

3. Stay in the Game at ALL Times

Why do the Warriors keep digging themselves into these ridiculous double-digit holes that they have to fight and claw out of? There's definitely a lot to dislike about Mark Jackson's substitution patterns, but a lot of this on the players who are actually on the hardwood. Whether you're part of the starting 5 or player #6 through #12 on the bench, in a PLAYOFF game you have to come prepared and ready to play EVERY SINGLE SECOND you're on the court. That obviously didn't happen in Game 2's shameful 40 point blowout and in the 3rd quarter of Game 4 it looked like the Warriors for headed for another blowout.