Warriors vs Jazz: Another Sunday Funday at the Roaracle!

Coming off a huge win on Friday against the Sacramento Kings, our Warriors have their eyes set on another victory and season sweep vs the struggling Utah Jazz. In a game where every win counts, the Jazz look to play spoiler this evening while our Dubs march on to another post season run! No mistakes allowed on this one, let’s get the job done Warriors and keep pushing!

Share All sharing options for: Warriors vs Jazz: Another Sunday Funday at the Roaracle!

X-Factor - Draymond Green: D.G.'s having one helluva season! Green had a double-double against the Kings on Friday night scoring 10 points with 10 rebounds (not to mention a pair of assists, steals and blocks) starting for the Dubs. We're gonna need that fire going into the game tonight.

Secret Weapon - Marreese Speights: Actually, it's no secret. Speights has been contributing some great numbers alongside Jermaine O'Neal during Lee & Bogut's absence. He recorded a nice double double as well off the bench securing Friday nights win.

No mistakes allowed: At 24-52, sadly the Jazz have the worst record in the Western Conference. It's plain and simple folks... run the floor, maintain a strong lead and play some great defense. In no way should this be a close one. With Trey Burke & Derrick Favors putting in some great numbers, we need to contain these guys and not get comfortable.

Magic number: 4. No pressure, the western conference standings are a close one. Take in an "easy" win tonight (knock on wood, nothings ever easy at the Roaracle!) we can make a push for the 5th spot and clinch soon enough.

Predictions (Note: some might be blown out of proportion, lol)

Career night for Stephen Curry. Triple double night, I got dibs he'll pull it off 3 minutes into the third quarter! (place your bets!)

Draymond, Mareese & Jermaine: Look out Utah, they're all going to have great nights.

The "Splash Brothers Night" event isn't until Thursday at the Roaracle. The pre-game event may start early if these guys hit it off at the 3-point line... Splash! 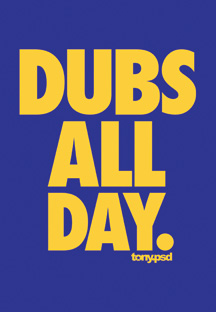