The End of the Klayup

Where I post videos and write lots of words on how Klay Thompson is a much better driver than ever before.

Share All sharing options for: The End of the Klayup

Attempting to gauge an athlete's growth at a certain juncture in their career from an outsider's perspective is often fool's gold. It's hard to know enough without doing a personal interview like this one or are a beat reporter that is paid to spend every living second keeping track of said career. Without understanding what the specific player is working on or the happenings behind closed doors, it's a guessing game trying to decipher tangible growth. We expect players to step foot into the NBA as finished products or ones that need "seasoning." Klay Thompson was considered the latter.

I've had the pleasure to watch every minute of Klay Thompson's professional life. From those naming him "Klank" after several miserable shooting performances in his first season to playing the Robin to Stephen Curry's Batman as the Splash Brothers. Somewhere between all that spawned "The Klayup" where Thompson would dribble the ball wildly in traffic, looking to make something happen, usually resulting in the ball bouncing off the rim and backboard in ways we didn't know possible from that short an area. To whittle offensive growth into a single aspect is to aimlessly point a flashlight into a cove of darkness. But Thompson's increasing confidence and ability to convert tough layups has been the most obvious improvement on the team.

During the 2012-13 season, Thompson's sophomore campaign, he shot the ball in the restricted area at a 51.1 percent clip. During the first half of this season, he remained around the same, converting at a 53.4 rate. With over a 250-shot sample size, this wasn't so much a fluke but a flaw. It wasn't a terrible number but for a player his size, it left fans wanting. For a player that was considered "NBA-ready" we certainly didn't expect the type of growth that was just beyond the horizon. 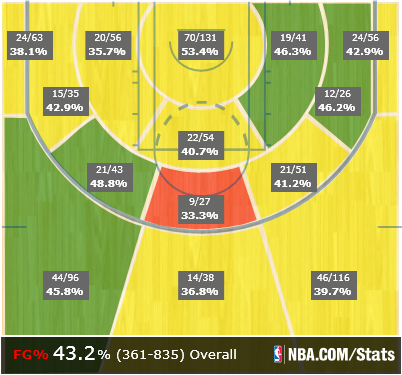 Be it the escalating number of minutes (nearly 38 through 53 games) or lack of repetition, Thompson struggled through a horrific slump during the last month before the break. With Curry and Andre Iguodala out for stretches of time and Harrison Barnes contributing almost nothing, the onus was on Thompson to not only defend but initiate the offense. The week off let the Golden State Warriors recuperate and slide Thompson back into the secondary offensive role he was built to thrive in. 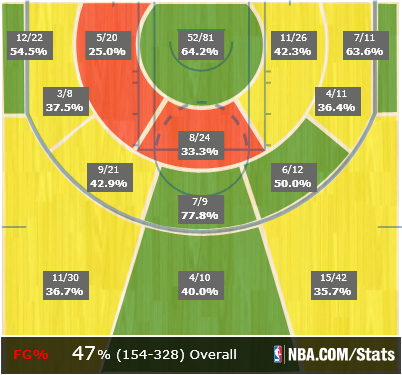 After a game against the Sacramento Kings where Thompson slashed repeatedly to the rim against an underwheliming defense, I asked Mark Jackson if anything changed in Klay's game:

"I think the obvious thing is that he's putting the ball on the floor and attacking. That's what happens when you stay true to the process. That was something he couldn't do or wasn't comfortable doing when he got into the league."

Let's start with how Klay Thompson looked at the beginning of the season when he was still struggling with opposing length and his own confidence.

Here, Thompson comes off a baseline screen - 23 percent of Thompson's plays come off screens, tied for highest with spot-ups, also 23 percent - and has Tayshaun Prince pushing up against his right hand. Likely guarding against Thompson's quick release and deadly jumper, he bodies up Thompson. This makes it easy for Klay, not the fleetest of foot, to get around Prince. However, not yet trusting his left hand, he instead tries a tough reverse that never has a chance of going in.

This is Thompson on a similar play against the Houston Rockets after the All-Star Break.

There is no hesitation or wasted movement. Against Prince and the Memphis defense, he switched triple threat position before driving. Against the Rockets and James Harden (stay with me here, stop chuckling), he didn't bother waiting, instead going right at Dwight Howard, who was a step slow on the rotation. Not only did he make the layup look easy but the midair exchange from right to left hand was something he rarely attempted early in his career.

Back to the bad: what compounded some of Thompson's struggles in the first half was his penchant to telegraph his plays.

Let's just skip over the fact that Barnes looks like he still had some semblance of confidence left, dribbling the ball between his legs and whatnot. Ah, the good days.

Anyway, Thompson comes off the screen and instead of reading the defense, immediately tries to hit the Draymond Green on the dive cut. It doesn't work because: 1. the spacing is horrible with David Lee also standing near the paint 2. Anthony Davis is long. Regardless, Thompson doesn't try to probe the defense, instead, making the decision for them with a blind pass.

Finally, here was Thompson's timidness off the dribble showing up.

As a catch-and-shoot player, Thompson has no conscience. Even if he's missed ten threes in a row, he's jacking up the next one with full confidence it'll go in. And that's what Mark Jackson wants to see. Coming off the screens and presented with several options? He becomes a different player.

With Austin Rivers a full step behind him, and much smaller, Thompson stops his dribble mid-drive and leans in for a tough in-between up-and-under floater. That type of indecision plagued not his turnover rate (never great anyway) but the efficiency of the offense overall. With Lou Amundson as the rim "protector" in this situation, there's no need to stop dribbling until he's in the air ready to dunk.

After the break, the gradual improvements started to show. The ability and physical size were always there, it was a matter of time before the smarts and confidence were given a chance to catch up.

That's an old-man game move reserved for guys like Andre Miller and Kobe Bryant. Knowing that he isn't going to finish over too many defenders, Klay allows his body to do work underneath while flipping the ball up quickly before anyone else can get there.

The threat of the jump shot freezes Jae Crowder for a second and that's all he needs. Coming off screens will always give Thompson an extra step or two on defenders.

Klay gets his revenge against the Memphis Grizzlies.

Thompson gets the ball near the free-throw line, scans his options (Jermaine O'Neal covered on the baseline and Marreese Speights for a long two), wisely declines, and drives straight to the basket against Courtney Lee. It's a bad angle on the video but Thompson visibly shoves Lee off with his off-hand, allowing a free path to the basket. Nothing special, but wildly effective and necessary.

While Green is excellent at making snap decisions off the dribble and Barnes awful at the other side of the spectrum, Thompson is firmly entrenched between the two. Cutting out the loose decisions with the ball and using his jumper and length to get around and finish over defenders has led to a much more efficient second half. It remains to be seen whether Thompson can sustain this type of attack, but the lack of flash or fluky single-game outputs leads one to believe that this is more about the linear growth of a basketball player than simple sample size theatrics.

"This was another guy who cares, works his tail off and has added to his game since he got here. It's scary how good he is and how good he can be just adding [the drive] to his game."

Statistical support for this piece provided by NBA.com, unless stated otherwise.