The Warriors fought hard throughout an emotional Game 7 loss to the Clippers, but really fell apart in the third quarter. Why did that happen? And what might that say about the direction of the team this offseason?

The emotion of last night's game seven still makes it hard to fully reflect on the 2013-14 Golden State Warriors season.

That first round series with the L.A. Clippers probably had 3-5 games more excitement than we even got and it might've given us those games had it not been for insane officiating (Game 1) and off-court drama (Games 4 & 5).

As for last night, the Warriors gave it all they had in Game 7 and there's plenty to be proud of and hopeful about as a fan. For the first half, they played pretty good ball with the exception of their turnovers and general inability to impede driving Clippers players in the paint. The Clippers just blew up that porous interior defense in the fourth quarter, shooting 60.9% from the field outscoring the Warriors 20-8 in the paint but Stephen Curry almost did enough to save the Warriors by going a whopping 9-for-9 from the free throw line.

Yet while the procession of alley oops near the end of the game put an exclamation point on the win, and ultimately the expected narrative of the series with Andrew Bogut's absence, the third quarter is where the Warriors really let this game get away from them.

Do the math and the Warriors won the rest of this game 101-96. It's pretty clear that multiple things just went completely wrong for the team in the third, but what could they have done better to stop the bleeding a bit?

I actually have a partial answer for this question: Redick is masterful at reading and using screens and was actually wearing out Warriors defenders coming around screens in Game 6, but just didn't knock down his jumpers. Early on, he made the right personal adjustment in catching the ball off screens and making a hard move toward the rim - with defenders already in catch up mode, they were in no position to change direction to stay in front of him.

Mark Travis of Clips Nation did a pretty good job summing up Redick's value to the Clippers in his preview of their next series against the Oklahoma City Thunder:

The Clippers love to run him off of screens and Redick has become very good at getting into pick-and-rolls when he receives the ball rather than just shooting all of the time. That ability for the Clippers to essentially run rotating pick-and-rolls on different sides of the floor can extend Oklahoma City's big men and create some space under the basket. It's also important, of course, for Redick to knockdown the shots he gets, particularly in transition, as this is sure to be an up-and-down series.

Against the Warriors, Redick did most of his damage in the third quarter when he scored 10 of his 20 points on 4-for-7 shooting, including 2-for-4 from the three point line.  Notable was that the Warriors just seemed to completely lose him in transition, which allowed him to get open looks that you just can't give Redick.

This was already going to be a tough game to win on the road with a disadvantage-waiting-to-happen on the interior, but Redick's shooting and the Warriors' seeming confusion in how to defend him along with all the team's other weapons exacerbated the team's other problems.

Did David Lee sit for too long in the third?

Let's be clear here: Lee did not play well as a whole in this game and Adam Lauridsen summed that up pretty well.

The blown defensive assignments, missed opportunities to score late in the game and a run-breaking crunch-time turnover stood out against the focused and aggressive efforts the rest of the squad. Last off-season, the Warriors supposedly weren’t shopping Lee for anything less than a superstar (think Kevin Love-level). This season, with a potential starting replacement in Green, the Warriors’ demands for their potential trading parters may start to drop. At the very least, when everyone is healthy again, there needs to be a serious discussion of whether the Warriors are best served with Lee starting.

But considering he wasn't in foul trouble and the lead they brought into the second half was evaporating and turning into a deficit, it didn't quite make sense that he was taken out of the game in favor of Mareese Speights in the third quarter for five minutes. When Lee left the game with 7:27 left they were up one (before Speights did put them up three with a jumper); when Lee returned with 3:06 left they were down five.

Can someone please explain why Speights is getting so much run over Lee??

Again, let's be totally clear that Lee wasn't great, but he was a +12 in the first half and +7 through the first three quarters, before the wheels really fell off in the fourth. With everything else going on in the third - and the fact that going with the Green-Lee frontcourt had been their best bet all series - it wasn't entirely clear that removing Lee from the game there was helpful, especially when the rest of the unit that was salting away the lead was left in the game without a timeout or sub.

Why did the Warriors' offense collapse in the third quarter?

We all knew that the Warriors would have to get hot from the three point line to have any shot at winning this series and in the first half they did but their shooting touch just left them in the third quarter, as described by Mike Bresnehan of the L.A. Times.

Redick had 10 points in the third quarter and the Warriors' surreal three-point shooting finally slowed down. They made only one of four behind the arc in the quarter.

Along those lines, their shot chart suggests a team almost afraid of the paint in the third quarter. 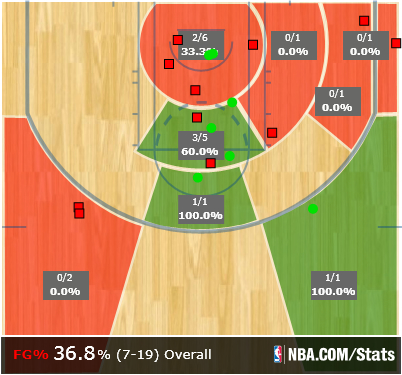 Shooting under a third of their shots from inside that five foot area is low even for a Warriors team that is obviously heavily perimeter oriented. And bear in mind that those two made shots around the rim were a Curry fast break dunk off a steal and the other a Klay Thompson layup off a beautiful Draymond Green outlet pass - they didn't score at the rim at all in the entire third quarter. Furthermore, the only player who even took a shot on the left side of the court was Curry with those two threes.

That's not exactly the picture of a balanced offense.

Obviously, the easy explanation here is that the Clippers' size simply intimidated the Warriors - DeAndre Jordan had two of his three blocks in the third and Matt Barnes' hard foul on Curry with 9:14 left seemed to create some hesitation for a long stretch. But another part of their third quarter struggles really was the inability of Iguodala to play his role as facilitator efficiently. As much as this team is clearly reliant on Curry, the role we got so excited about for Iguodala this season really was that secondary ball handler role. With the team seemingly unable to get anything going, they resorted into a lot of tough one-on-one shots and things sort of fell apart from there.

And it's quarters like that which highlight the need for some improvements in the offseason: they simply ran out of options.

The discussion of where all these turnovers come from is worthy of a longer analysis, but also one that doesn't really apply here: players were making basic, unforced, ball handling errors - that's not on coaching, strategy, or anything like that. Bogut certainly would've helped to just provide help defense in the paint that nobody else seemed interested in providing. But they desperately need options to look to for a boost or change of pace when they find themselves incapable of making a field goal out of their half court offense for four straight minutes.

"Options" certainly means finding someone(s) who can reliably create offense for themselves off the bench, but also strategic options: this team has a major problem with just stagnating for long periods where there's little movement, way too much dribbling and everyone seemingly trying to force hero ball scoring opportunities that aren't the team's most efficient options.

A lot of good really did come from this first round performance in terms of making it plainly obvious that the small ball lineup - or just having Draymond Green being a larger part of what they're doing - is of great value to this team at least in some matchups and very certainly more often than we saw it during the 82-game regular season. But if this team wants to take a leap in a crowded Western Conference, they have to figure out how to eliminate these types of dry spells from happening so often.

For more on the series, check out our Warriors-Clippers playoffs section.