Warriors vs. Clippers 2014 NBA Playoff series recap: A game-by-game summary of a thriller

Doc Rivers said the first round series between the Clippers and Warriors seemed like it lasted more than a week. As we all catch our collective breath and move on to thinking about next season, a game-by-game recap of the series.

Share All sharing options for: Warriors vs. Clippers 2014 NBA Playoff series recap: A game-by-game summary of a thriller

John Schuhmann of NBA.com wrote after the Toronto Raptors' loss to the Brooklyn Nets in the Eastern Conference quarterfinals that coach Dwayne Casey maintained that there is generally no momentum between games in the playoffs even if, perhaps, there was evidence of some between Games 5 and 6 of that series.

But the Golden State Warriors and L.A. Clippers series was probably the exact opposite, defying the notion that there was any room for talk of momentum in a playoff series.

Not only was every game in the league's most exciting seven game series almost entirely different, but the majority were also determined by such anomalous circumstances that there wasn't much we could even hope to take to frame expectations for the next game.

I'd argue that all the uncertainty was what made this series so exciting and, in being so full of anticipation, both one of the most captivating and exhausting playoff series in years - it was made-for-television NBA playoff basketball and it's a shame that a) it had to end and b) one of these teams had to go home.

So before we look ahead, an attempt to recap a great series in words and images with a focus on what made each game unique.

Check out Basketball-Reference for the full stats from the series. Headers below are linked to our storystreams for each game with the recaps, links, and any other post-game analysis we had here at GSoM. The Warrior Wonder for each game is listed as well, but vote in the poll below for your series MVP.

Just to show everyone who was in charge, the refs took control of Game 1 to publicly demonstrate the breadth of interpretations possible for a NBA rule book. They dominated this game and proved that they're not to be taken lightly.

So belated congratulations to them on that accomplishment. Ultimately, the Warriors scored more points than the Clippers on the actual scoreboard and accomplished their mission of stealing a road game right off the bat. 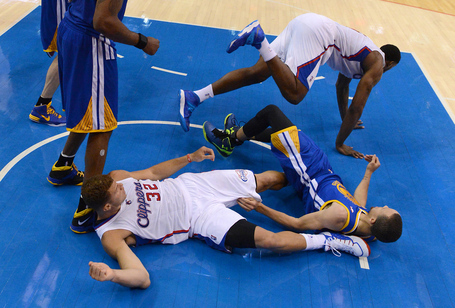 In hindsight, it's clear that this game was just a ref-produced outlier. But at the time, I suppose there were three camps among Warriors fans: the optimists, who saw the game as an affirmative statement to the Clipper and all the haters that the Warriors weren't going to just roll over and die without Andrew Bogut; the realists, who immediately recognized there was nothing to take from the game because it's probably easier to beat the Clippers when Blake Griffin fouls out after only 18 minutes; the pessimists, who expected aggressive and harsh retaliation from the Clippers in Game 2.

Here at GSoM we embrace all beliefs so I'll reserve public judgment of those camps.

Anomaly: There were 51 total fouls called in Game 1, with Chris Paul and Blake Griffin (fouled out) combining for 11. 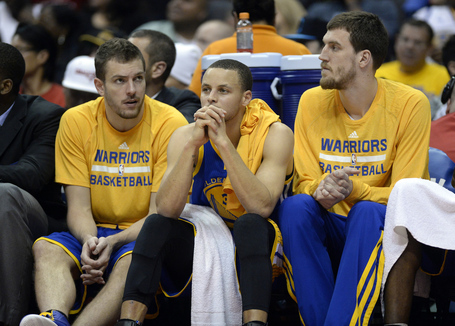 The Clippers were exactly who we thought they were and we let 'em off the hook (with 27 points off of 26 turnovers).

Anomaly: Anomalies were legion, but shout out to DeAndre Jordan for hitting 7 of 8 free throws.

The strange thing is that this was probably the first game where Bogut's absence clearly would've changed the outcome for the Warriors. But even I'm saying that, you have to acknowledge that the Warriors had a real shot to win this one without Bogut anyway.

Every great playoff series has that one What If moment that might have turned the entire course of the series had the ball bounced differently or a call gone the other way. Curry's missed three at the end of regulation was one such moment.

The league reviewed the play and said there was no foul there...but you make the call!

Anyway, you can see how the outcome of the series might have been totally different had Chris Paul been called for a foul there (and Curry had hit the ensuing free throws, as we've come to expect): the Warriors would've gone up 2-1 and, given off court distractions in Game 4, very likely 3-1. Let's not question that the Clippers were the better team in Bogut's absence, but getting three straight to win the series would've been tough, especially with the swirling controversy.

Either way, the big takeaway from this one was unquestionably the value of small ball to the Warriors, which triggered a strategic shift in the series rather than helping the Warriors build any sort of "momentum": with Draymond Green and David Lee in the frontcourt, the Warriors stormed back from down 18 and turned the ball over just once during the final 17 minutes. Green's ability to defend Griffin and spread the Clippers out defensively would end up being critical in the series.

Another "lesson" learned: it's hard to win games when you miss 25 threes.

Anomaly: The Warriors shot 6-for-31 from the 3-point line (and 2-for-20 through the first three quarters).

As others have written elsewhere, the outrage about an 81-year-old billionaire's racist comments was almost silly in light of his past. Yet to suggest that the controversy resulting from the outrage had no effect on the outcome of Game 4 is either willful ignorance or delusional homerism - it wasn't just a Clippers excuse, but a concrete distraction.

At this point, it's well-documented that the Clippers had the Sterling controversy on their minds entering Game 4 at the very least; at worst, ESPN's Ramona Shelburne reported that they might have spent half an hour or less preparing adjustments for Game 4.

It's believable because it showed in their performance.

The Clippers looked terrible, the Warriors were at home, and they evened the series at two games apiece. 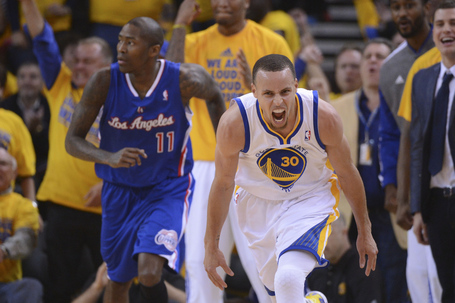 In retrospect, there's just no credible way to argue that the Clippers hadn't lost the game before tip-off. And that's that.

Anomaly: Sterling is racist Everyone (finally) talking about how racist Donald Sterling is.

At the very least, we can probably say that the game was suddenly thrust into a national spotlight arguably unlike any NBA first round game ever and Staples was became the epicenter of a discussion about race in the U.S. While fans protested outside, the Warriors were reportedly busy planning a protest of their own inside in case Silver's decision wasn't as forceful as they had liked.

If it all the hoopla didn't distract the Warriors, it's more than fair to say that Silver's announcement gave the Clippers an emotional boost. Not that there was any way to know how a game under those circumstances would turn out, but the Clippers played inspired ball and the Warriors looked like their sacrificial lamb on that day.

Anomaly: Playing on the night after a historic decision to ban a sports owner; planning a boycott if such decisive action wasn't taken; the Clippers had 41 free throw attempts, including a 9-for-17 performance from DeAndre Jordan.

The second quarter of this game seemed to be an eternity as the officials decided to bring their traveling ref show to Oakland to show off their ability to blow the whistle.

We'll probably be talking about Game 7 for some time, but the Warriors' character was revealed in Game 6. Backs against the wall, rumors swirling about their coach, losing veteran Jermaine O'Neal to injury after a collision with Clippers defensive tackle Glen Davis, they got the job done.

As both Kurt Helin of The Point Forward and Coach Nick of Bball Breakdown have described, there were some moments of outstanding execution, but for the most part this one was just ugly. But winning ugly is a credit to this team's resolve with their backs against the wall and missing a center rotation.

As the last time that we were able to see the Warriors in person this season, it was a great way to honor our team with applause one more time. Immediately after the game, fans walking out of the arena were talking about second round tickets as though it was a given that we'd get to see the team again - given where this team has been for the last few decades, that sense of hope and justified excitement about the future alone was just special to be around. The sea of yellow that helped buoy the Warriors to victory outside the game flooded into the plaza outside the arena afterwards for a little post-game plaza - what better way to celebrate a Warriors playoff win than with a little Too Short?

Being at Oracle is always awesome in the postseason, but it has still happened so infrequently during most of our adult lives that it felt special - it was almost as though we expect the Warriors to be there and return. In case you're unaware, that's new.

Game 7 was a perfect blend of all the elements of the choppy "narrative" of this series brought together in way that made it among the most satisfying postseason losses in some time.

The Sterling Effect was still present, at least in part, if only evidenced by Doc Rivers' reaction in the waning moments. The interior dominance that figured to be a factor throughout the series in Bogut's absence ended up sealing the deal for the Clippers. Turnovers haunted the Warriors throughout and turned into the Nightmare On Elm Street in the third quarter, seriously damaging their chance for victory. Draymond Green showed up on the biggest stage of his career and gave a standout performance, which will probably bring him the pressure of high expectations next season that Harrison Barnes failed to meet after his supposed coming out party last postseason.

It was the marquee matchup on a day of three game sevens and ended up being every bit worthy of the hype and a fitting end to a dramatic series. We can wonder what might have happened if things throughout the series had gone differently or if Bogut had been there, but it's hard to be too mad about that: at some level, we have to be able to appreciate a series like this as basketball entertainment and this series truly had it all, the Monta Ellis of post-season matchups.

The Warriors fell short this season, but for the first time in a very long time we can look forward to officially being a perennial playoff team when the Warriors make the postseason next year. And while there's no doubt that we'll have plenty of postseason memories to share ahead, this was one for the ages that some of us have been waiting for our entire adult lives.

As for the post-game altercation, I'll just piggyback off of Tom Ziller and just add a question: where's Tim Thomas for playoff commentary when you need him?

Great series, good season, bright future. It's all you can ask for.

Anomaly: Strangely, Warriors fans haven't experienced a first round loss in the post-season in two decades, which makes the very fact of falling short of playoff expectations a bit of a novelty. Nevertheless, it was a perfectly satisfying, though exhausting, loss.

For all of our analysis of the Warriors' playoff run, check out our Warriors-Clippers playoff series section.

Who was your Warriors MVP for the series? (Players who played 60+ minutes, listed alphabetically)