Today's Season in Review covers one David Lee, who, apparently, is an actual basketball player and not just a controversial set of highly debated statistics and voluminous contract figures in theoretical trades for Kevin Love. Who knew?

No, I definitely checked with verifiable sources (the internet) — David Lee exists, much as he always has. His status hasn't changed all that much in the past few years: he still produces lots of points and rebounds, is questioned for his defense, and makes a ton of money. Also still has a faux hawk, probably.

The fact that I barely remember Lee's contributions this year, how he's been relegated to contractually necessary afterthought this offseason, and how we generally talk about him in ho-hum tones, convinces me of one thing: I have a terrible memory. Ok, two things — I also think David gets a raw deal.

Not financially, of course — and finances are the primary reason we groan in his general direction as much as we do. This is a reality of the NBA and nobody is at fault except the desperate owners who overpay for a chance at mediocrity-plus. Even so, raw deal. Contract aside for a moment, Lee has always brought more positives to the table than negatives, and 2013-2014 was no different.

David Lee put up 19.8 points per 36 minutes, actually the highest single season scoring rate in his career, on 56.6 TS% — not stellar, but a few points above average (and higher than marksman Klay Thompson). Like his points per, both his PER and Win Shares were second on the team behind Stephen Curry. His effort? Second to none! Except most certainly Draymond Green.

Lee's rebound rate in 2013-2014 was below his career average. However, unlike in most years past, the team rebounded better with him on the court (52% TRB) than without (50%). And statistically his defense does not quite perfectly resemble the sieve that it used to — his best career DRtg at 103, a negligibly negative -0.2 DRAPM, and a puzzlingly positive DRPM of 1.36 that makes you wonder if there was a gas leak in the ESPN offices. Still, I'll take it.

David's decent TS% came despite his typically embarrassing blocked shot rate (1.4 of his shots were rejected per game), but also an atypically flubbed midrange game. Below is the shot chart for 2013-2014, with charts for 10-11, 11-12, and 12-13 sitting atop it. In years past, Lee has found at least some success with his midrange jumper, at one of three zones from elbow to elbow as well as along the baseline. This season was a bit of a nightmare for him out there. 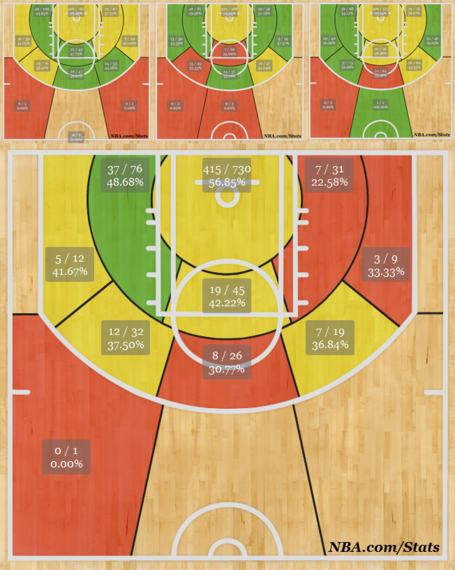 His poor shooting clearly affected his overall game. He took less of the floor-spreading, honesty-inducing jumpers and forced the action more inside; and while he scored at a reasonable rate for himself in the paint, his imbalanced attack hurt overall floor spacing, which in turn gave him less outlets for a normally stellar passing game. Lee's assist numbers were down significantly this season, also not helped in any way by the absence of an offensively effective low post partner to pass to, or an offensive scheme that could take advantage of his ability to move the ball to the open man.

There are reasons to be positive about next year for Lee. Assuming his jumper returns, his defensive effort continues to resemble respectability, his rebounding remains a net positive for his team, and his shiny new Coach Steve Kerr understands how best to use him, Lee could have a highly effective season. But, yes, it's probably just as likely that, at age 31, his game plateaus or begins to decline, and we go through another season of witnessing his production but wishing he did more or that we paid him less.

And if he's traded to Minnesota? I imagine we'll quickly forget about him. And honestly, that's a shame. David Lee has been a consummate professional for this franchise, helped usher in a post-Cohan era of something better than embarrassing futility, and has gotten in the face of Blake Griffin on multiple occasions. For all his effort and production and being a solid teammate, I for one resolve to think of him as more than a pudgy contract and a faux hawk.