Season in Review: How Strong are Stephen Curry's Shoulders?

The Golden State Warriors, contrary to popular belief, struggled from the beginning of the season until the end. Ranked near the middle of the pack despite what many believed as a team with explosive offensive pieces, it took a Herculean effort from Stephen Curry to barely keep them alive in games night in and night out.

Share All sharing options for: Season in Review: How Strong are Stephen Curry's Shoulders?

Before each game, David Lee and Stephen Curry high-five and meet at center court before turning and sprinting to the end of the baseline area, slapping the stanchion, and running back onto the hardwood all before the first tip. This signifies that the two captains are in tune with each other and the game, I think. Both veteran presences on the team, they've been consistent in carrying the team to where they are the past couple seasons. Lee curiously made the All-Star team two years ago but Curry left him in the dust during the 2013-14 season in ascending to not only the most valuable player on the team but one of the finest guards in the world.

We're going to start with this. 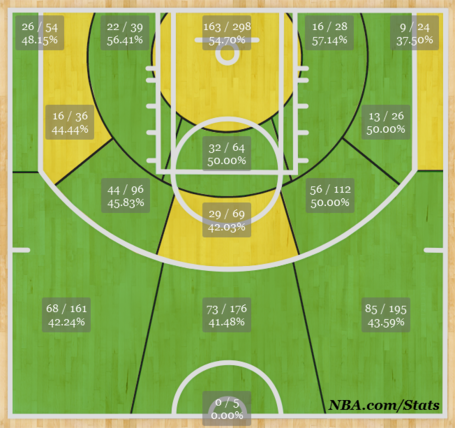 Gorgeous lake, if I must say so myself.

To put in perspective just how anemic the already average offense was without Curry at the helm, they were a +3.4 per 48 minutes. This led to him playing 36.5 minutes per game, just slightly under the previous season's career high average of 38.2 per game. His teammates suffered immensely without his presence. Klay Thompson boasted an effective field goal percentage of 52.9 with Curry and 48.9 by his lonesome. Draymond Green fell from 47.5 EFG percent to a miserable 40 without Steph. When Andre Iguodala was pressed into action as a primary ball-handler without Curry, his shooting fell from 55.2 to 47.4.

Curry's absurd ability to hit shots off the dribble essentially created an offense by his lonesome, cratering even the best defenses in the world.

The sample size is small but who cares? Steve Kerr is implementing a new offense that will take the ball out of Curry's hands a bit, but make no mistake, it'd be a fool's errand to restrict the amount of stress Curry can put on a defense with his singular shot-making ability. And all this green on the board without the necessary passing that comes with a team that ostensibly boasts several above-average passers in Andrew Bogut, David Lee, Andre Iguodala, and Draymond Green. Curry shoots 50 percent on guarded jumpers and only 47 percent on open ones. The Warriors led the league in fewest passes per game and Curry still sunk an inordinate amount of threes at a historically efficient rate. Curry might be better off shooting these rhythm step-back threes instead of open spot-up ones. Don't break what's not broken, right?

It's been well over a season since Curry's last ankle sprain. Since coming up lame against the Denver Nuggets two postseasons ago and limping through a series against the San Antonio Spurs, Curry's been consistent in staying on the floor. He's filled out a bit in his diminutive figure and while it hasn't shown as much in his finishing ability (the same as always), it's kept him on the floor. It doesn't mean the ankles worries are gone forever but it does mean the contract he signed while in career limbo a couple seasons looks awfully great for Bob Myers right now, especially with the team's salary cap situation so tight. 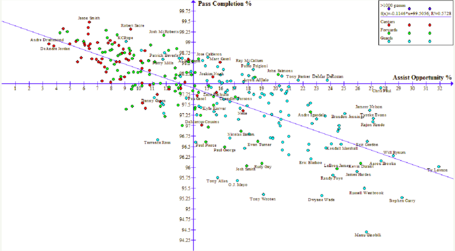 From Nylon Calculus, here's a distribution on the percentage intersection between assist opportunity and pass completion. Curry is way down on the right side of the graph. Does it mean he's a bad passer? Probably not. We know he's an excellent playmaker that is superb in the pick-and-pop with David Lee and devastating finding the open man in the corner when driving. The issue is with the hero passing. Especially last season when he was forced to shoulder so much of the offensive responsibility, there were many occasions where Curry had to make something out of nothing. This doesn't absolve Curry of all the turnovers, though. His high-risk high-reward mindset lends itself to some of the threes he takes. The give and take between the confidence in shooting and passing is necessary when judging just how much he has to do and what he can do.

Last season might be the last one where we see Curry run exclusively at the point guard position, bringing the ball up and dribbling repeatedly into shots and defenders. It appears that the Warriors plan for the future is to limit the hits he has to take on a daily basis. Sure, they're coining it as a efficiency excuse but it'll be interesting to see how he's used on defense (still hidden against weaker defenders?)

While we bemoaned the lack of scheme and originality (unless you count isolations like this is the 1970s originality) that might have been the last time we'll ever seen dribble-dribble pullup 30-footers with three seconds on the shot clock because absolutely NOTHING was going on on any side of the court. Curry isn't going to be scurrying through six pick-and-rolls per possession anymore. It'll be some weird effective motion offense that the Spurs run or something. Pwah. Gone will be the Curry running around while Harrison Barnes flails about with his head on fire only to dish to a falling Curry desperation heave.

Look, things will probably be better on offense, it's just that Curry might never be as fun to watch.

Statistical support for this piece provided by NBA.com, unless stated otherwise.