Marreese Speights 2013-14 Season Review: Where he scored 32 points in one game

Marreese Speights was fun to watch, at times. He was frustrating to watch, in other times.

Share All sharing options for: Marreese Speights 2013-14 Season Review: Where he scored 32 points in one game

In most of the season reviews, there's a specified amount in the benefit of the doubt reserved for certain players. In Mark Jackson's offensive scheme - let's face it, that's much more easier to judge offhand than defense - there wasn't much to glean sans the consistent Stephen Curry awesomeness. That being said, the 3-year/11-million dollar deal didn't look or feel so bad when signed and it isn't really that awful now. To put it brashly and unfairly, Spencer Hawes signed a 4-year/ 22.6-million dollar deal this offseason and Speights isn't that much worse off. So a new season review summary: Marreese Speights Is Not Much Worse Than Spencer Hawes And Is Paid Much Less. Anytime you judge a deal by how relatively non-awful it is, that's a decent sign, said no one.

And in one of the best and funniest moments of the entire Golden State Warriors 2013-14 season, here is Speights feeling himself after a floater in a playoff game against the Los Angeles Clippers.

As for what else happened on the court:

That's more or less a troll statistic, if you're into that kind of stuff. The Warriors certainly didn't sign him to duplicate some Kevin Love-esque tendencies. But Speights' ability to consistently hit a jump shot seemed like a good way to stretch the floor whether he was a power forward or center. He was effective in spurts on offense when he was able to crash the boards and shoot open jumpers. It wasn't all bad.

Speights functioned as the nominal backup four to David Lee and mostly stayed there as a pick-and-pop player on offense with a dose of odd isolations mixed in. Mark Jackson eased off his minutes in March and April but Speights was forced into duty with the numerous injuries to Andrew Bogut and Jermaine O'Neal. Unfortunately, much of the same will be asked of Speights this season with Festus Ezeli presumably out and no depth behind Bogut. 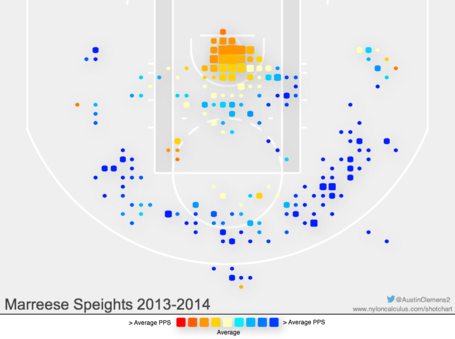 It's not awful! It's not awful! Using Nylon Calculus' PPS (points per shot) feature, it rates Speights as an above-average shooter on most midrange jumpers. Looking at the field goal percentage portion of this, though, gives us a clearer notion. Speights is way below average, shooting under 40 percent on three different midrange zones.  However, there's a ton of room to self-convince oneself that Speights can be a productive player in Steve Kerr's hypothetically offense-driven system. Like Harrison Barnes, we're expecting spacing and a knowingness as to what's happening on the court to help with the actual flow.

Then here's Speights' shooting from the previous two years. 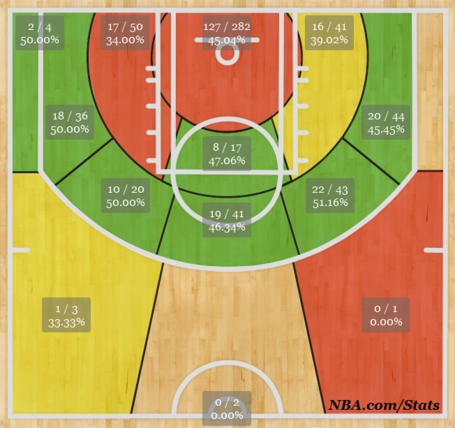 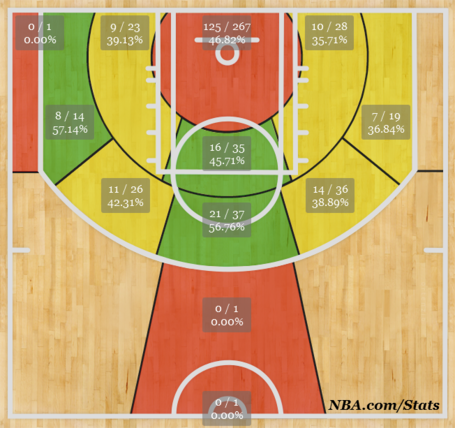 It is not awful! If we're to expect - yes - a regression to the mean, it's not the shot selection we're concerned about, but the actual path with which the ball takes before it singes the nets.

As for defense, Speights was much better as a forward than as a rim protector. Not one to challenge a shot, Speights was efficient enough on isolations and functioned well enough in Jackson's system when he was in there with Draymond Green and Bogut. All that is code verbiage for stating that Speights tried hard at times but wasn't very good doing the things you want from someone who's coming in for David Lee, of all people.

Marreese Speights is probably the best candidate on this team to improve, or in his case, to perform at a level that's he capable of. It's a really weird thing to be excited about; the improvement of a particular player because the previous season was so outlier-ly mediocre. But here I am, dutifully waiting the renaissance of Marreese Speights. Now about stretching those long twos to threes...

To conclude, here's The Speights Game. After a combined 28 minutes in his previous three games, Speights got to play against the Philadelphia Sixers. Enjoy.