Welcome to another October rabid Warriors fans and bandwagoner's alike! While the rules regarding playoff structuring has made inter-divisional action a little bit less meaningful in a way, the Warriors would still like to win 1st place in the Division in consecutive years for the first time since '74-'76.

Standing in their way are the Clippers, Lakers, Kings and Suns. We will start Part I of the division with last year's cellar dwelling Los Angeles Lakers. 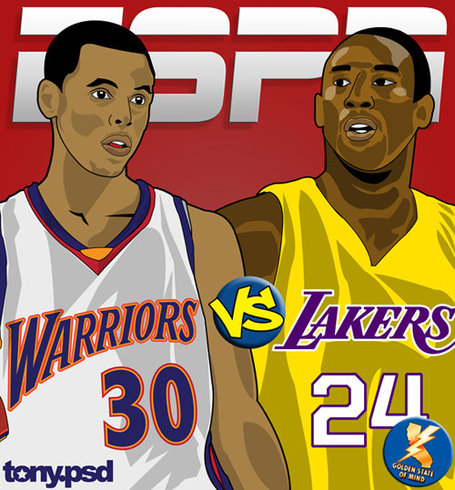 The Lakers don't look to be much more than a 30 win team this season. Byron Scott definitely has to be feeling his seat getting warmer this year. Kobe's contract is still suffocating this team from getting and retaining a formidable roster.

D'Angelo Russell looks to be the real deal coming out of Ohio and is even making strides in his relationship with Kobe Bryant , a feat not going unnoticed, considering Kobe's disposition towards certain players who have made their way into the Staples Center.

Hibbert looks to be a solid signing for the Purple and Gold this offseason. His elbow injury should be healed and he even dropped 14 lbs this summer, indicating a desire to become even more of a force on defense. All-star whisperings have been heard coming out of Los Angeles early in this year's camp.

All in all the Lakers still seem to be the weakest team in the Pacific but the Phoenix Suns and Sacratomato Kings may have something to say about that too.

Next week we will go into Part II and give a quick synopsis of the aforementioned Suns squad and their woes.

Feel free to drop a Rec if you liked this and don't forget to Vote!!!!

Predict the Lakers standings in the Pacific Division this year.