2015-16 Warriors preview: How does Golden State stack up against the revamped Western Conference?

Each SB Nation - NBA blog will be previewing their team as part of the network's massive 2015-16 preview effort. We're getting a head start on that by having our staff answer the questions and soliciting your input as well. To wrap up our series, we look at goals for the season and potential road blocks.

Share All sharing options for: 2015-16 Warriors preview: How does Golden State stack up against the revamped Western Conference?

Matt Moore of CBS Sports did a very good job of breaking down Ty Lawson's comments about how his addition to the Houston Rockets would give Stephen Curry a challenge should they meet the Golden State Warriors in the playoffs.

I was particularly pleased that Moore brought up how Curry "absolutely torched" Lawson when the Warriors faced the Denver Nuggets in the 2013 NBA Playoffs due to rather fundamental defensive breakdowns, as described back then by SB Nation's Mike Prada — obviously, the current Rockets are a different situation, but given the past the comments are just sort of...odd. 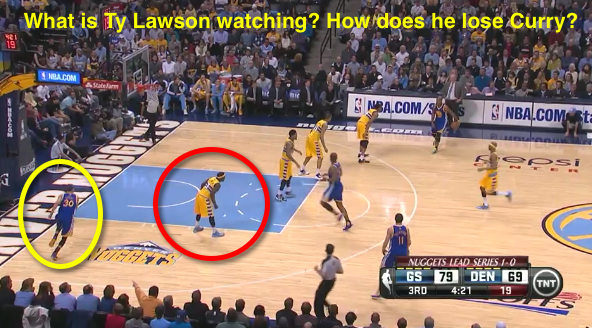 Nevertheless, I do think Lawson's comments reflect the fundamental challenges the Warriors will face this season, if nothing else: 1) everyone who's anyone will be focusing an uncommon amount of energy on how to stop the Warriors (I still can't believe I can make such a statement seriously in real life) and 2) teams made moves in the offseason that do improve their chances of beating the Warriors even if they don't ultimately beat them.

The addition of Lawson to a healthy roster does make the Rockets more dangerous, even if his comments struck people as off-base. A healthy Kevin Durant, Serge Ibaka, and Russell Westbrook trio will always strike fear into my heart. The San Antonio Spurs continued to do their thing this offseason by adding LaMarcus Aldridge. The L.A. Clippers...got new uniforms that might distract opponents?

But the point is that things are not about to get easier for the Warriors as they look to repeat. So how did they stack up? To complete our roundtable preview of the season, we look at the Western Conference and how the competition might prevent the Warriors from winning another title.

What are the goals for this team?

Conrad Chow: This one is simple — repeat as champions. Last season, the Warriors played a historic year of basketball and caught a couple breaks along the way due to injuries to the opposition. With teams like OKC and San Antonio healthy and reloaded, Golden State will be faced with a tougher task to win back-to-back titles. When you're a champion, the only goal is to keep winning.

Andrew Flohr: Repeat as NBA Champions. Plain and simple. And resigning Harry Barnes wouldn't be a bad goal for the front office.

Chris Nielsen: When you're one of the few teams that could be considered contenders for the championship, that's your only goal. Surpassing last year's win total would be special, but it's unlikely. Everything needs to break right to win that many games, and I would hope that Kerr will be more conservative with resting players this year after going deeper into the postseason last year than any other team, even deeper than the Cavs, if you count the after-party.

Ivan Bettger: Staying healthy. If they're healthy, they're contenders to repeat.

As Jarron Collins said to me recently, "You get that opportunity to pour champagne, you just wanna keep doing it." -Bram Kincheloe

Nate Parham: Obviously we want to win it all again — I'm all about that #ChampionshipLyfe. But a related goal has to be keeping this team healthy, especially Andrew Bogut and Andre Iguodala. We already saw the importance of keeping 2015 Finals MVP Andre Iguodala healthy. But Bogut reportedly had back issues while playing with Australia this summer so I'm really interested to see how they preserve him during the season to make sure he's fresh for the playoffs (and if Festus Ezeli can step up into bigger minutes that will certainly help the cause). I'm not sure they would've won it all last year without both of them available so I think their health is something to watch and maybe that new medical technology they're trying out will help.

Apricot: Expand their grasp of the new offense — introduce more reads, more alternate options as teams overplay passing lanes and double team Curry and others. See if Ezeli can replace Bogut in the offense as the passing hub. See if Barnes (and his spanking new oversize contract???) can more actively contribute to the offense. Introduce new approaches (with the brand new medical staff) to resting players and keeping them healthy. And of course fight complacency and the Disease of More, and fight for another championship.

Bram Kincheloe: As Jarron Collins said to me recently, "You get that opportunity to pour champagne, you just wanna keep doing it." The team will have to learn to let go of their success. Learn to concentrate again on the task at hand. Because, really, last year is over. It's time to chase another ring. Everyone else in the league is going to be circling their games with the Dubs — gunning for a chance to knock off the champs.

Derek Knight: It doesn't matter if your team was 67-15 or 15-67, every team comes in with the only team achievement the NBA gives out: a championship.

That said, there's a number of subgoals the Warriors should be gunning for. Kerr should be trying to roll out some of the wrinkles in the offense that the coaching staff pulled from the playbook last season due to turnovers. Thompson should be looking to improve on his off-ball defensive awareness. Bogut should try and repeat as consecutive playing-bonus champion

Did the Warriors get better this offseason?

Earlier this week, the Golden State of Mind staff reviewed the Warriors' offseason and discussed the most significant moves.

Media Day recap: Nobody believes in us

Perhaps a little disrespect is exactly what this year's Warriors team needs.

Did the Warriors get better this offseason? Media Day recap: Nobody believes in us

Ronaldinho: This year is really about just doing everything a little bit better. Sharper rotations on defense. Quicker cuts on offense. Livingston developing better chemistry to reduce his emphasis on long post-ups. Harrison being a little more smooth off the dribble, and little more comfortable on covered threes. Draymond squeezing another couple of percentage points out of his three-point shot.

Basketball Jonez: The Warriors have the know-how and the roster to win a title. They've proven that. Now they have to get back to do it again, and that's going to mean being healthy at the right time. If the team has the top eight or nine guys ready to play in May and June, watch out.

Jeff Cheal: The goals will be a process, with the obvious end being what every other team wants, a championship. Fans have to remember that if we don't win 60 games again, the season will not be a failure. The #1 seed and a Pacific Division title will be the intermediate goals, with the playoffs just being the next step. As we have said above, it will be execution game after game as the basic blocks that get us back to the top, because now we know that if we do it right, the product delivers success.

Jared Stearne: Championship or bust. The Warriors return the deepest, most talented roster in the NBA. They also bring back most of an excellent coaching staff, a potential defensive player of the year, and the reigning MVP. They won 67 games last year, but through the development of their young contributors, they could reasonably be expected to be a better team this year. They will face some excellent competition on the way there, but any goal short of a repeat Championship is selling this fantastic squad short.

So with repeating in mind, how do you see the Dubs stacking up against the revamped Western conference?

Andrew Flohr: Chemistry is something that should not be over-looked. With the Dubs returning basically their entire team, there is a trust and bond that was formed over the course of last season. I don't think the Thunder have good enough team chemistry to win the championship — there are just too many questions surrounding Durant and Westbrook. Who knows how LaMarcus Aldridge will fit into the Spurs system, but I imagine he will have a good season. I think the Rockets have the best chance of being able to knock off the Dubs. I don't think they will, but adding Ty Lawson at the point guard spot is a huge pick up. But with any season, one injury can pull the rug out from any team.

Apricot: Very interesting year coming, with so many questions. Each known serious challenger appeared to get better -- half of the West and the Cavs. But none of the improvements are slam dunk pluses. Can Harden share the ball with Ty and his demons? Will the Clips' three headed hydra at small forward gel, or will there be not enough ball for anyone to really lock in? Will the Spurs finally experience a loss of continuity with Aldridge and the rest finally age like mortals? Will Durant's foot ever be the same and can Enes Kanter outscore what he gives up on D? Will Anthony Davis and the Pels install an offense that harnesses the force-of-nature-AD as an engine?

Derek Knight: Some teams improved significantly... on paper. Others regressed... on paper. The Warriors proved they can blitz through the conference. The burden of proof as to why the Warriors cannot be as dominant as last year rests on those who think they won't.

Basketball Jonez: The West will largely be decided by health. The Warriors, Thunder, Rockets, Grizzlies, Spurs, and Clippers all have enough firepower and experience to take home the hardware. The teams that win the top seeds will be the teams that keep their players on the floor instead of the trainer's room.

Jeff Cheal: Everyone got a little better, and a little more healthy. But so did the Warriors. The front office kept its major pieces, and continues to add more weapons. They added more big bodies to defend off the larger teams in the west (welcome Jason Thompson) and continue to try to add more shooting (welcome Ben Gordon!). It doesn't really matter who you put at the top of the West - they match up in different ways with each of the teams out there, and honestly can play more of a versatile style to many of these squads (besides the Spurs who have the same flexibility).

Jared Stearne: I may be in the minority, but I like them a lot. The Rockets, Spurs, Clippers and others made a variety of helpful additions, but they had to: they weren't good enough to beat the Warriors as is. The Warriors aren't getting worse this year, and they're one of the only teams in the league with the roster variety to address each and every one of their opponent's strengths. It will certainly be harder to face off against so many improved squads, but here's the truth: you'd rather be the Warriors facing them, than anyone else in the field facing the Warriors.

Who do you see as the biggest threat to the Warriors' hopes of repeating? Vote in the poll below and let us know in the comments. For more of our thoughts on the upcoming season, stay tuned to our 2015-16 Warriors Preview section.