What does John Henson's contract with the Bucks mean for the Warriors as they negotiate an extension for Festus Ezeli? Plus daily links related to Steve Kerr's return to practice, Andrew Bogut losing weight, Tom Thibodeau's visit, and Shaun Livingston shooting from distance.

Yesterday John Henson signed a 4-year deal with the Milwaukee Bucks for at least $44 million, while Tristan Thompson continues to pout/hold out over a reported 5-year deal for $80 million from the Cleveland Cavaliers.

These are unprecedentedly large offers for reserve power forwards with no expectation of starting games in the foreseeable future. Everyone in the Bay is focused on Harrison Barnes' contract negotiations, but what will Henson's contract mean for Festus Ezeli and the Golden State Warriors as they seek an extension to his rookie deal? Should fans expect to see Festus earning double-digit millions as a backup center in the years ahead?

Based on his performance in the 2015 NBA Playoffs, where Ezeli posted a plus/minus of +33 in the Houston series and played ahead of Andrew Bogut in a crucial role in the championship-clinching game, the Warriors should value Ezeli as an eventual starting center. Other teams already do and will be licking their chops in the event that he becomes a restricted free agent next summer. Locking up Festus today as an overpaid reserve could prove to be a bargain if and when he earns a starting role as Bogut rests, signs elsewhere, or starts to slow down. This assumes that Ezeli remains healthy, which has been a struggle so far and could serve as leverage for Bob Myers in negotiations. But if Ezeli gets through the 2015-16 season injury-free, the Warriors will be looking at a much heftier price tag to keep him for the long term.

The Warriors have four weeks to find a way to sign Barnes and Ezeli to extensions and the crazy amount of dollars flying around the league these days will not make Bob Myers' life simple. David Aldridge pointed out last year that players like LeBron James and Carmelo Anthony are realizing that owners of billion dollar franchises are capable of making sacrifices to keep winning teams together by paying the luxury tax on a routine basis. (Someone send the memo to the Spurs, please...) The financial decisions made by Golden State this month could be a harbinger of things to come across the league in this battle for power between players and owners.

What advice would you give Bob Myers this month as he grapples with the salary cap considerations in negotiations with Barnes and Ezeli? And what would you tell Barnes and Ezeli (or, more realistically, their agents) - take less to keep the championship team together or force the owners to make the sacrifices? Let us know in the comments section.

Kerr's Back: While Dub Nation was concerned upon getting word of Steve Kerr's leave of absence to recover from back surgery, reports of his presence at practice on Friday lend credence to Ron Adams's assertion that Kerr would return well before the season opener. Still no word as to whether Kerr's exposure to new player development consultant Steve Nash lead to the recent complications. Odds are that Kerr will be highly motivated to be with the team on opening night when they receive their championship rings while wearing these classy championship jerseys.

Bogut Dishes on More than Assists: Andrew Bogut spoke with Tim Kawakami about trimming 20-30 pounds over the summer, Steve Nash's contributions in practice so far, salary politics among the team while Harrison Barnes negotiates a huge extension, not playing in the last games of the Finals, competing with Festus Ezeli for the starting center position, and the bizarre departures of assistant coaches in the last year of Mark Jackson's tenure with the team. Enjoy the interview for the content or merely for the Australian accent. 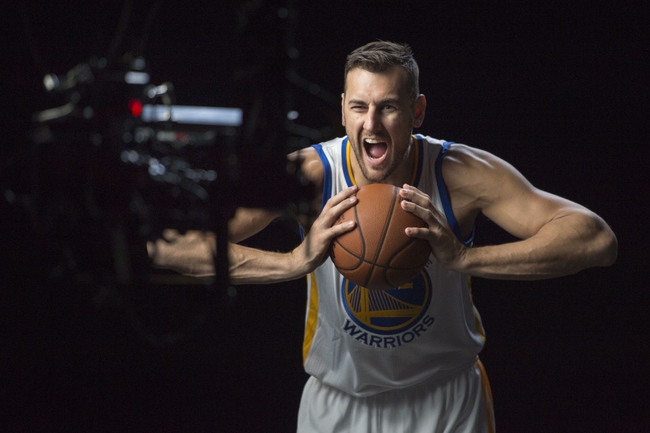 Kerr Pays It Forward: Diamond Leung notes that Tom Thibodeau and Jamie Dixon (head coach at Pitt) are among coaches recently visiting the Warriors. It sounds as though Steve Kerr is aiming to give back to others the way coaches and executives assisted him prior to becoming a head coach. Thibs is visiting several teams, so don't read anything special into his visit. Bulls fans report that his time with the Warriors would be well spent learning the value of managing players' minutes.

Look Who's Shooting the 3 Now: Star reserve Shaun Livingston has been working on his 3-point shot over the summer. According to Diamond Leung, Coach Kerr saw Livingston hit enough corner 3s in practice last year to harass him about developing the shot over the summer. This would be a dramatic change, as the point guard has made just 10 3-point shots over the course of his entire NBA career. The article suggests that Mo Buckets might get in on the 3-ball this year, too. Get ready for more of this!