Steph still has the swagger setting turned to 11.

Share All sharing options for: Stephen Curry's swagger is in postseason form

Stephen Curry's swagger is an undeniable force of energy. We are only one game into this young season, and already Steph is dropping hot fire and bending the rules of physics.

Flying down the court, he whipped the ball around his back to Klay Thompson, who dropped it down to Draymond Green, who rifled across court to Curry who had backpedaled into the corner. Steph launched the shot, and a mere half second after it left his fingertips, he turned to Andre Iguodala and went for the high five.

The ball wasn't even halfway to the hoop.

We have to raise the threat level on Steph Curry now. This is ridiculous pic.twitter.com/HDAtNQGpIo

If this was a video game (which, really, who can say? There's a good chance we might be living in some alternately-projected holographic universe governed by giant, sentient ants. Until you prove me wrong I will blindly continue to believe this), Steph's swagger level would be constantly set to 11. "But there is no control toggle for swagger!" you might yell. "And even if there was, it can't go above ten!" you might protest. "Why wasn't the game televised?!" you might ask, grappling with deeper, underlying problems such as disbelief in a failing sense of reality. For if these games aren't televised, and you live in some godforsaken place like, say, New York City, then did any of this actually happen?

Here's another view of that play:

Stephen Curry is unreal. He is super real. Nothing has changed from last year. He still has it. They all do. The passing, the charisma. The smiles and the memory of flowing champagne.

As my man Zito Madu said, "If [Steph] gets better this year then we might have to just cancel the season."

Hot damn, it's time for another year of basketball! 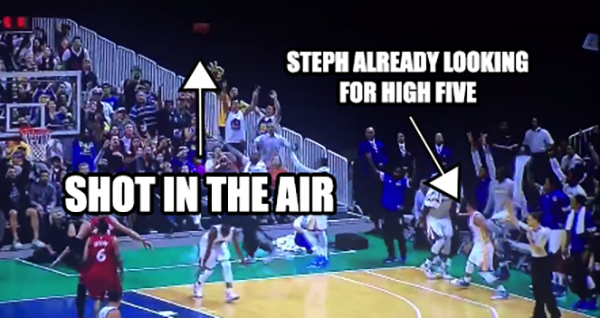