The Golden State Warriors' Lineup for the Ages

It's the greatest quintet of all time.

Share All sharing options for: The Golden State Warriors' Lineup for the Ages

There's a crescendo that tears through Oracle Arena when Stephen Curry swings his right arm up through his shooting holster, readying to unleash the most beautiful, and accurate, shot in the history of basketball.

When it rips through the chords, the masses erupt in a sort of delirium reserved for thirsty ancient Roman crowds. If by some ungodly chance, it falls by the wayside, the ensuing groans resemble those of a missed game-winning jumper at the buzzer of the NBA Finals.

During the NBA Finals, Nick U'Ren unveiled a lineup that became famous for its effectiveness in essentially turning the series on its head and winning the Golden State Warriors the championship. Throughout last season, the small lineup with Draymond Green at center and Curry, Klay Thompson, Andre Iguodala, and Harrison Barnes stocked around him torched teams with no mercy. This season, however, with its ridiculous 14-0 start, has fully thrown this death lineup, nuclear lineup, smallball lineup, whatever you want to name it, into the limelight.

What do you call the Warriors' small lineup? 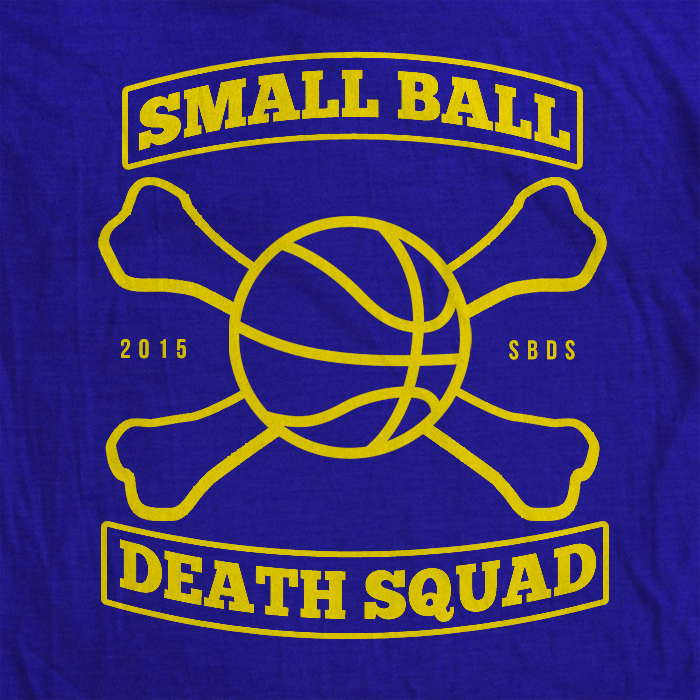 During the Warriors' game against the Bulls last night, there was some discussion on Twitter about what to call their small lineup. Here at Golden State of Mind, we've coined the title Small Ball Death Squad (SBDS) to describe it...and immortalized the term with a shirt, which is still available via BreakingT.

All this to sum up that the closer lineup, aptly named by Ethan Strauss, came in again with just under four minutes left in the game and easily outscored the Chicago Bulls the rest of the way, 14-5. It's the lineup rarely used in the beginning and middle of games because, well, they don't need to. Combine that with Draymond Green's fit at center with the risk of injury and this becomes the trump card of all trump cards.

Now recall that suspended adrenaline paused in the air as Stephen Curry hoists another three? We are slowly getting to the point where everyone in the audience, watching on TV, and on the court, now realizes that when this lineup comes on, it has a very good chance of everything going extremely well for the Warriors, and horrifyingly bad for everyone else.

The crowd is slowly realizing the inevitable is worth gasping aloud for. And just like Stephen Curry's jumper going in at astronomically high rates, this lineup is already shutting and running away with game at historically great levels.

There isn't necessarily a way to describe the strength, quickness, awareness, and talent that pours out of this five but the amoeba-ness of its dominance is chilling. The Bulls, and the Los Angeles Clippers on the previous night, actually looked like a JV team on offense trying to dissect the varsity defense with stuttered movements that befall freshmen. NBA players shouldn't look this disjointed, their instincts so jumbled, and entire brain systems rewired.

We've seen this before. It's won them a championship. But maybe because it stopped LeBron James just enough it seemed merely normal. Against the rest of the NBA laymen, this is a completely unseen, yet improved, variation of the monster the Warriors have concocted. Now everyone is here for it, witnessing it, playing against it, and the suspense of when it will take over a basketball game is intoxicating beyond measure.

1. Luke Walton specifically pointed out in the postgame presser about the small lineup's ability to defend and referencing Draymond's instincts to come help when the strongside opened up and stonewalling Jimmy Butler at the rim. Draymond basically explained it later as just helping his man out as there were a bunch of decoy motion on the weakside. He chalked it up as a simple help defense but that's insane instinctual movement from a player that combines the tangible and intangibles.

2. Since everything is about the small lineup, here's Bulls head coach Fred Hoiberg on it: "I think when you look at the plus-minus, it's playing better than any five guys, any type of combination in the league. It's a tough, tough lineup. They do a great job switching and making it difficult on the one end."

The Warriors get the Denver Nuggets on Sunday and then the Los Angeles Lakers at home next Tuesday to break the record. Think they don't know what's at stake?