Warriors vs Lakers preview: Golden State has a chance to make history

Share All sharing options for: Warriors vs Lakers preview: Golden State has a chance to make history

Another Los Angeles team is in town and boy are we in for a showdown!

Don’t underestimate this L.A. Lakers team — anything out of the ordinary can happen. For Golden State, we have the arsenal to come out with a 16-0 record. The momentum is on our side along with the home court advantage. Let’s put this in the record books Dub Nation!

The Warriors. I don't even know where to begin right now. A part of me feels like there's an expert video game player with really good NBA 2K16 skills is controlling our players, dropping arcade like stats. Golden State's numbers don't lie: They're 8-0 at home, 10-0 in the last 10 games and are flying high on a 15 game win streak!

Some fun Warriors tidbits: If the Warriors win tonight, they'll make history by becoming the only team in the history of the NBA to win their first 16 games within a season. They would be surpassing the 1948-49 Washington Capitols and 1993-94 Houston Rockets, who both won their first 15 games.

If the Warriors do make history, they'll be outfitted with their classic "The City" uniforms, taking a blast from the past. Oh, let's not forget the Dubs will be honoring Warriors fan favorite Jason Richardson. Oh my, I also forgot to mention that it's Draymond Green bobble head night! (for the first 10k fans) You don't want to miss this game! (sadly, I have work)

As for the 2-11 Lakers who are sitting at the bottom of the Western Conference... They've got a chance to spoil tonight's party. After a rough defeat against the Portland Trail Blazers Sunday night, LAL is looking to bounce back from back to back losses. 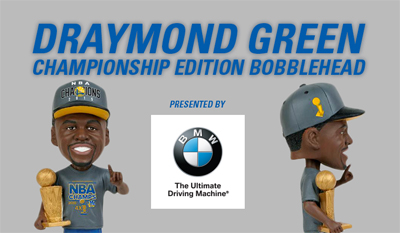 Stephen Curry is going to get hot like fire, no question at that. It's nights like this that will ignite our MVP!

Supporting cast on deck. Expect a big game for Klay, Draymond and Andre who aim to fill up the stat chart.

Speaking of Draymond. I'm predicting at least a double double performance on the eve of his Bobble head night event! He's the glue holding this team together!

I got a feeling Festus Ezeli and Andrew Bogut are going to protect our rim tonight. Looking for a solid rebound night for these two. Did someone say Block Party also?

Laker Nation, our Lakers are used to setting records on teams, tomorrow the Warriors will set the record for the best start in NBA history.

Win prediction: Warriors win it by at least 12!