The Warriors host the Lakers tonight at 7:30 p.m. PST with a chance at history.

I was tidying up a few things around Golden State of Mind late last night in preparation for the Golden State Warriors' game against the Los Angeles Lakers tonight and stumbled across a tweet that made me do a double take.

Byron Scott is threatening to bench the Lakers' young players for lack of execution https://t.co/6LU7ujUuSP pic.twitter.com/pINDMjXbhP

And because I'm a Star Wars geek who can often relate any situation to something that happened in my favorite movie series, I immediately thought the following was a fitting response in advance of tonight's game (remember, it was late): 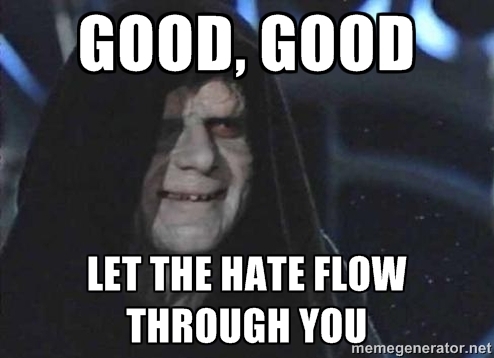 That was before I saw this...

Please put 150 up on them, Warriors. Please. https://t.co/YofCkTiIQO

...and hours after this:

Byron Scott said Kobe Bryant has earned the right to ISO and not move the ball. https://t.co/cMufRrSVAZ pic.twitter.com/YGLaF6MTFN

I'm not sure what's going on down there in LA LA Land, but it stands to work in the Warriors' favor as they try to make history. It's almost getting to the point where I feel so sorry for Lakers fans that I no longer want to make fun of them.

May the Force be with Lakers fans...sometime after tonight.