This year's Golden State Warriors have blown any preseason expectations out of the water. The Dubs are 36-8 and should be viewed as title contenders as this point.Much of Golden State's success can be attributed to a revamp in play style by new coach Steve Kerr, who did away with Mark Jackson's plodding play sets and unleashed a run-and-gun monster on the rest of the league. Normally such dedication to a high-octane, fast-paced system comes at the expense of a team's defense; when a team plays in the full court, it gives up easier looks in transition and tends to tire on the defensive end much more easily. The league's fastest-playing team has not posted an above-average defensive efficiency stat since the 2007-2008 season, when the Denver Nuggets managed to sneak into the top 10. The only team that comes anywhere close to being as good on defense while playing at as fast as a pace in the past 25 years was the 2002-2003 Sacramento Kings, beloved by hoops fans as "The Greatest Show on Earth." Those Kings held opponents to just 99.1 points per 100 possessions, second in the league that season, en route to a 59 win season and two-round playoff run.Take a look at this chart, depicting the success of teams in the past 25 years who played good defense and at a fast pace. 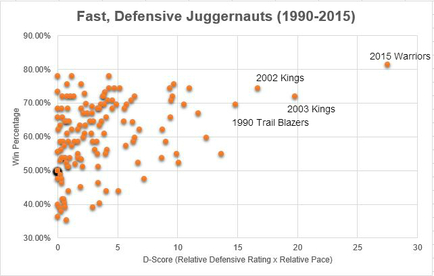 A plot depicting the fastest, best defenses since 1990.For the purposes of this exercise, I employed a made-up metric called D-Score, or(League Average Defensive Rating - Team Defensive Rating)*(Team Pace - League Average Pace)
to create a value based on fast defense. A team with a lower-than average pace or defensive rating will have a negative D-score; a team like this year's Warriors, with elite defense and pace, will rate very highly.And rate highly the Warriors did. By a lot. They are far and away the best combination of speed and defense the league has seen in 25 years. The only teams that really compare, the "Greatest Show" era Kings, actually have a fair amount in common with these Warriors. Specifically, those Kings were known for plus passing at every position, especially in the frontcourt - Chris Webber and Vlade Divac are probably the best-passing frontcourt of all time. The Dubs' frontcourt rotation of David Lee, Andrew Bogut and Draymond Green can also sling the ball around, and using bigs as passers is a main staple of Kerr's offense. Both the Kings and the Warriors were (and are) the toast of the league, praised almost universally for their fun, exciting brands of basketball.While it appears that teams that play fast and play elite D tend to win a lot, that's generally true for all teams that play elite D. Even though we may not be able to conclude that playing fast and playing elite defense are the magical ingredients to winning games, it's sure hard to do. And when it is done, you have a very fun basketball team.