At the all star break, Steph Curry, Kyle Korver and Wes Matthews were all tied for the league lead in 3PM with 161. However, since that point Steph Curry has gone one an absolute tear and has taken control of the 3 point race and is making a run at his record he set a couple years ago. 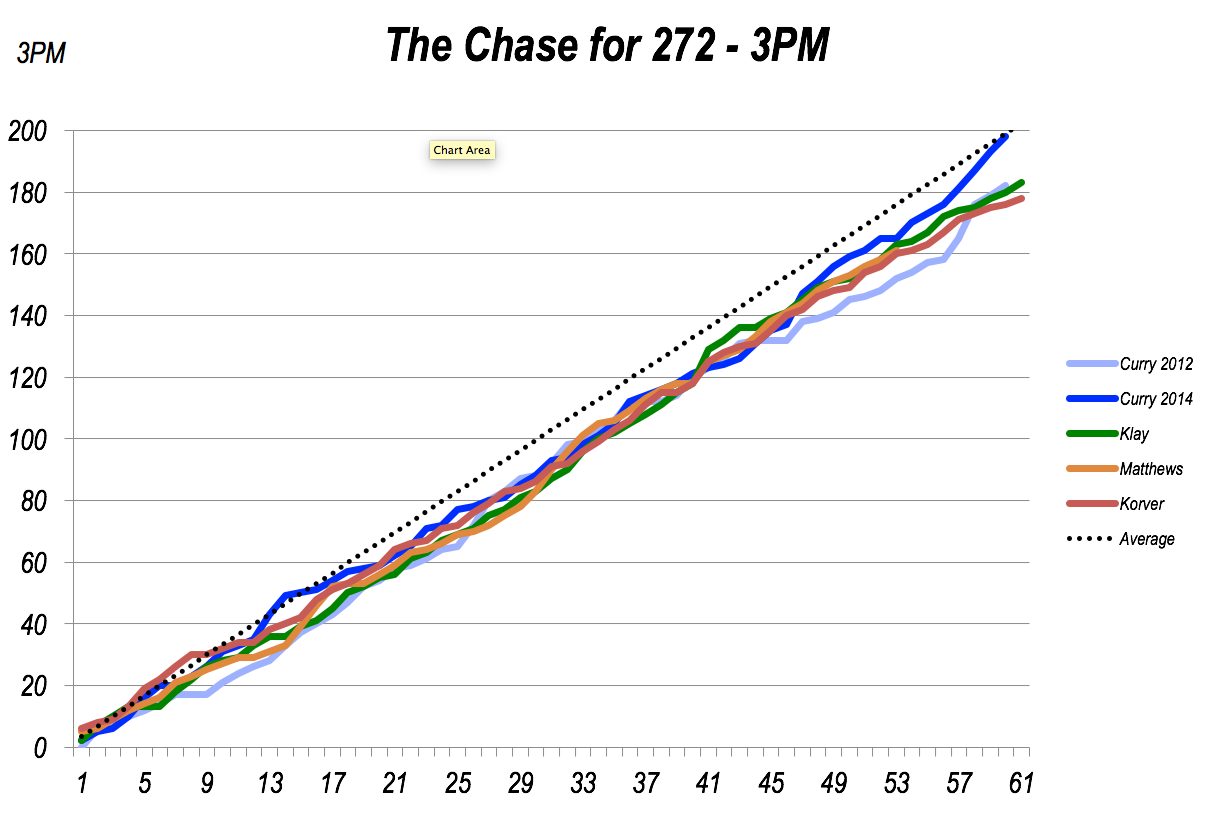 After going 5/8 on threes last night, Steph Curry now has 198 3PM made on the season in 59 games played. That averages out to 3.35 3PM per game, and extending that average out over the last 22 games for the Warriors would have him finish with exactly 272 threes, the same as his record setting year two years ago. Here is a chart tracking his 3PM this year compared to the record setting year. 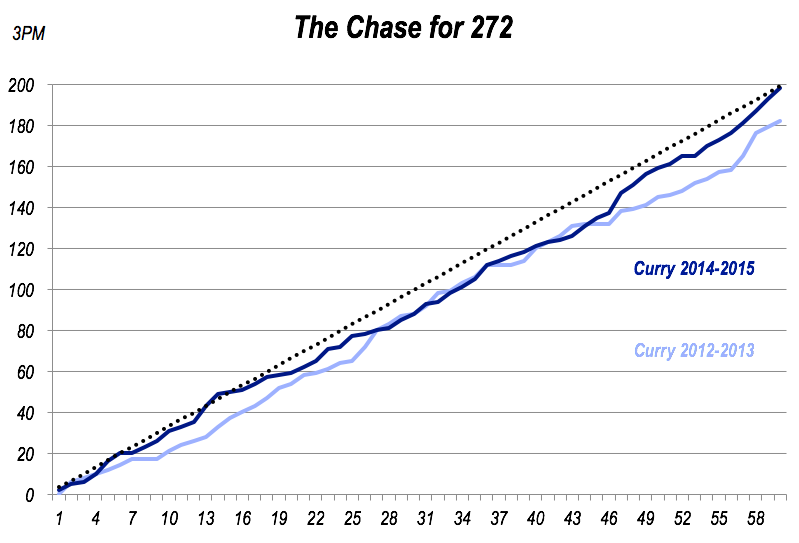 However, his recent play suggests that he has a great chance of breaking the record. In the 8 games since the all star break, he has made an average of 4.6 threes a game on 52.1% shooting (37/71), including 4 straight games of at least five 3PM, tying the record for the longest streak of such all time (Wes Matthews also did it earlier this year).

However, even if he does break his record this season, it won't be as impressive from a statistical standpoint as two seasons ago. When he got to 272 the first time, he did it on only 600 attempts, good for a ridiculous 45.3%. While he has 16 more 3PM at this point in the season than he did when he set the record, he has attempted 75 more threes. 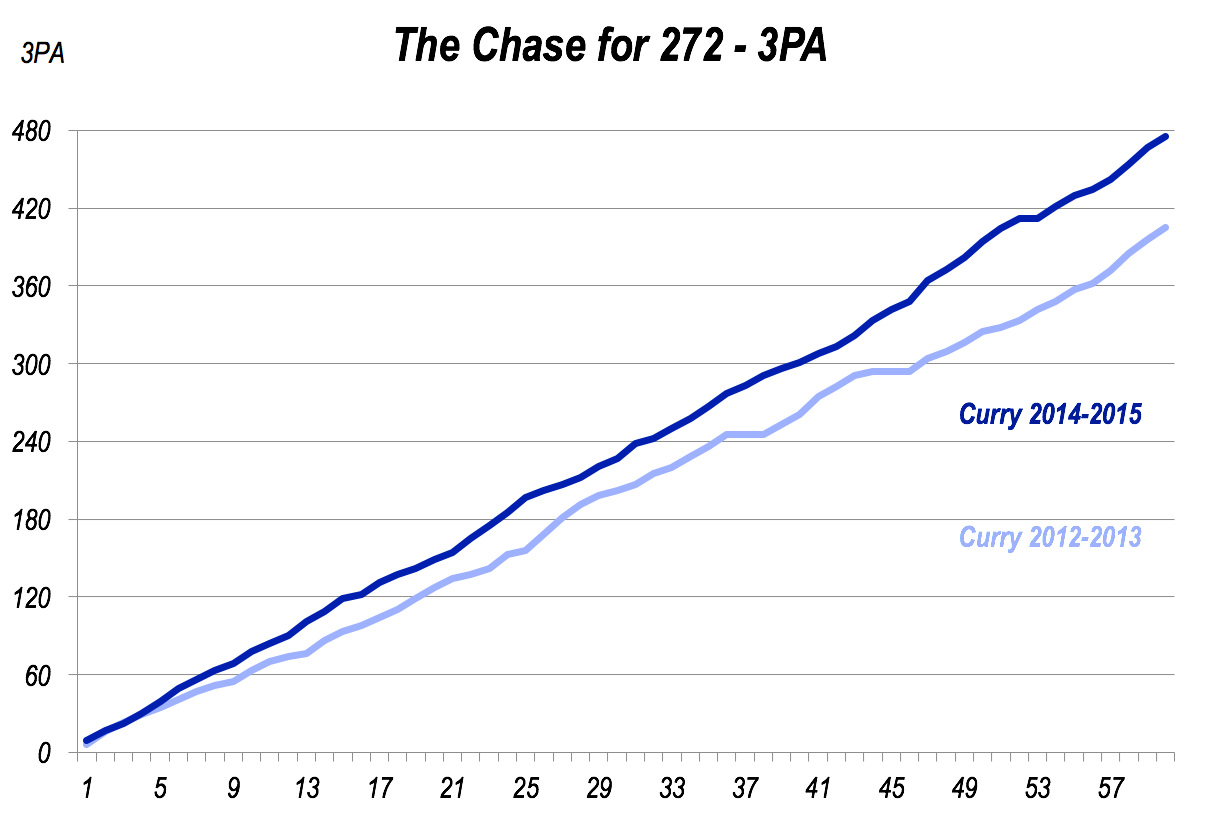 There were concerns early in the season about Steph's lackluster start from deep (by his standards), but those have been quelled recently. Steph has always been a player who improves his shooting as the season goes on, and this year has been no different.

This recent stretch of ridiculous shooting since the all star break has risen his 3pt% by 1.7%, and is now even better than it was at this point last season.

Even if Steph doesn't break his 3PM record, a record that will most definitely be broken is most 3PM by a pair of teammates. Steph and Klay have set and broken the record the last two years, and are [on pace to destroy it this season. Two years ago they made 483 threes and beat that by 1 3PM last season, but they are on pace to make 524 this season. 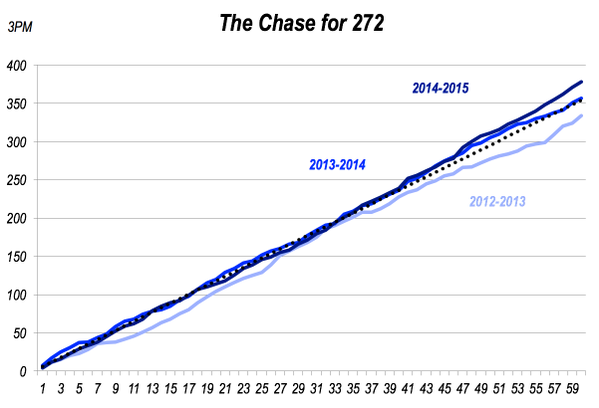