Share All sharing options for: Thunderstorms and sleep deprivation

Last night, I told myself I couldn't watch the game.

It started late—10:30pm here in New York—and I had to wake up at 5:30am to get my ass on a train towards downtown Brooklyn to work a farmers' market outside of the courthouse at Borough Hall.

I tried to make myself fall asleep. "I'll just watch the game on League Pass when I get home," I thought.

My wife came in to bed. "What're you doing awake?" she asked. "You know you can't watch it."

She rolled her eyes and practiced Spanish on her phone, using Duolingo. A hollow robotic lady voice speaking Spanish rang through the room.

"Seriously, just the first quarter," I said, trying to convince myself as much as her.

"Mmhm. Sure. Whatever you say."

So I turned on the game.

My wife was still practicing Spanish. "Go to sleep! Seriously! You'll hate it if you stay up!"

And then the second quarter was much more pleasant. The Warriors outscored the Pelicans 38 - 24, finally taking the lead right before the half on a gorgeous three pointer from Mr. Stephen Curry.

Ha! Hell of a time to take the lead fellas.

Everyone in the entire world knew that Curry three was dropping.

By this point my wife was asleep and I knew no matter what happened, I was going to stay awake until the game was over.

During halftime, the TNT crew cut to video of THIS:

Which led to Shaq saying:

Which made America cringe:

And led to this image, somehow: 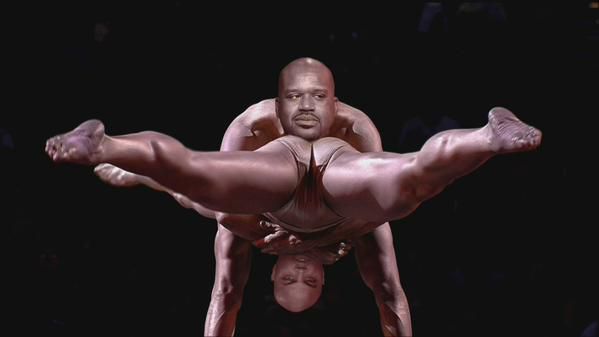 In the third quarter, the Warriors seemed to find their stride, but every time it felt like they might blow the doors off the game, the Pelicans were right there with an answer.

Safe to say Draymond brought his game face tonight. Because it's Dray all damn Day pic.twitter.com/aAFnCNBz0C

Also, did you know that DRAYMOND'S MOM IS ON TWITTER and she is frickin hilarious and awesome??!

I knew how she felt.

Sky just opened up in NYC. Thunderstorm. I have to wake up in five hours. This game is awesome.

Outside my window, the sky opened and thunder shook my bed. Lightning flared, screaming through the darkness.

Steph and Anthony Davis almost entered another dimension together:

And the Warriors eventually made one last run and gutted out an impressive victory against a hungry, capable opponent.

TURN DOWN FOR WHAT. #DubNation pic.twitter.com/Nqok6H3dNL

Mama Green put the finishing touches on it:

A few hours later—after what felt like a single condensed second or so—I turned off my screeching alarm and rolled out of bed as the sun was rising. I walked to the train. The springtime air licked my face. The sunlight was soft. Blue-gold rays of light crept out from behind clouds.

There are mornings you remember, when things are over-real and seem too bright to exist. Days when you remember that the easiest drug to acquire is sleep deprivation. Springtime mornings with more playoff basketball on the horizon. Headed to work. Content. At peace with your place in the world. Overjoyed to be a Warriors fan. Overjoyed to be alive.