The Rockets and Warriors set a NBA record for most combined threes in a game, but a big first quarter and 45 points from James Harden helped the home team to a Game 4 win to avoid a sweep.

The Golden State Warriors did not take a 128-115 loss in Game 4 of the Western Conference Finals solely because Stephen Curry suffered an injury in the second quarter.

When Curry suffered that head contusion with just under six minutes left in the second quarter, the Warriors were already down by 19. During the approximately 12-minute period that Curry was out (from 5:52 in the second quarter until 5:58 in the third), the Warriors outscored the Rockets 33-21 on 52% shooting, had eight assists on 13 made shots and just two turnovers. Klay Thompson led the way during that period, scoring 12 of his team-high 24 points.

And, perhaps ironically, the Warriors managed a franchise record for most threes in a game (they finished shooting 20-for-46 from three) despite Curry's extended absence.

Warriors have set a franchise record for threes in a playoff game with 17. Dubs are 17-of-37 from long distance tonight (.459)

After spotting the Rockets a 45-22 advantage in the first quarter, the Warriors actually outscored the Rockets 93-83 in the final three quarters and shot a scorching 16-for-31 from beyond the arc. Once again, it was a bit small ball that aided the Warriors as center Andrew Bogut played just 13:23 in those final three frames while Leandro Barbosa saw significant minutes. They were still within two possessions of the Rockets in the fourth quarter when it was 104-98 with 8:24 left before Barbosa missed a three.

In short, the Warriors could have won this game despite Curry's injury and a few questionable foul calls (or non-calls).

What this game came down to was that the Warriors came out flat in the first quarter against a desperate Rockets that simply played outstanding basketball.

You can analyze this game any way you want but the best point to make is that Josh Smith is 7-of-7 with three 3s.

Houston's 14 three-pointers (14-of-24) are the most ever by a Warriors opponent in a playoff game. Rockets lead 99-84 after three

Although James Harden finishing with a career playoff-high 45 points will grab headlines for this game, Josh Smith scoring 13 of his 20 points in the first quarter including three 3-pointers was the big difference. The Rockets shot 8-for-9 from beyond the arc in the first quarter and just looked like a team that didn't want to lose while the Warriors looked like a squad that expected to win. 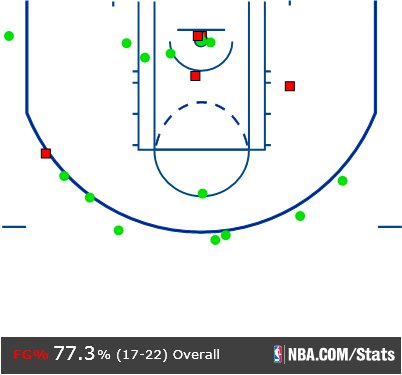 This game was a lesson in just how difficult it is to get a sweep in the conference finals: just 13 teams have done that in the nearly 40 years since the ABA/NBA merger and even some all-time great teams failed to accomplish that feat. A team can't take a quarter off and expect to earn a sweep to advance to the Finals. The Warriors were extremely fortunate to even scrap their way back into this one to have any sort of shot at a win.

In the end, there's no reason to panic or be disappointed about this one: a team that won 67 games this season and blew out a conference finalist by 35 in the previous game overcame an injury to the MVP and an onslaught by their opponent on the road to keep the game within reach. If anything, they've reinforced just how good they are and how good they can become as they continue to mature.

Houston outplayed the Warriors in Game 4 and deserved to win that one. We will have to wait and see what a more complete diagnosis of Curry's head injury might look like — I'm not a doctor and won't bother diagnosing anything here (but you can head to Twitter for plenty of amateur doctors making their diagnoses). What will be at least as interesting, if not more, to watch is whether the league upgrades Dwight Howard's foul on Andrew Bogut in the third quarter to a Flagrant 2, which would result in a one-game suspension.

Best of luck to the Rockets in staying alive in Game 5 on Wednesday at Oracle Arena.

For more on the game, check out our Game 4 storystream.