How the Warriors have defended LeBron James

The Warriors are heavily favored in this series, but LeBron James is still a problem that they'll have to solve in order to emerge victorious.

Share All sharing options for: How the Warriors have defended LeBron James

SB Nation's Mike Prada did a great job of describing why the Golden State Warriors should seriously consider not double-teaming Cleveland Cavaliers superstar LeBron James in the 2015 NBA Final while detailing why The King is so difficult to guard.

Prada's argument, which is spot on in my opinion is two-fold: first, LeBron tends to just shred just about every scheme thrown at him so you might as well play him straight up and not allow him to get his teammates going. Second, the Warriors have the personnel and top-ranked defense to have a much better chance than anyone else at pulling the daring feat off.

I totally agree with both points. Really, the Warriors agree too: they didn't double LeBron much, if at all, when they played him this year.

Regardless, LeBron James still strikes fear into my heart.

No matter how many people you think are capable of single-handedly winning NBA basketball games — and that alone is a conversation I'd love to have — LeBron is probably at the top of my list in that regard. While Warriors star Stephen Curry is susceptible to having random off games by virtue of being a shooter (s/o Charles Barkley of keeping us informed about that!), James is that special kind of player who has proven time and again that he can win games against most teams almost whenever he decides.

It's why there are still people out there looking to this series as a means by which to validate a 79-18 Warriors team that has been unbelievably dominant this year: only the elite teams beat LeBron and the rest need to hope he just takes days off. That's why he's making his fifth consecutive Finals appearance (and why he split the last four).

So just to get a better sense of how the Warriors have fared against James in the past, I looked at the Warriors last three meetings with the James: the one game they played against him this year and the two he played against him as a member of the Heat. And although Prada is absolutely correct about the double-teaming issue, it is interesting to look at how he could still be most lethal against this team — I wrote a list about it; like to read it, here it go!

This is totally speculative, but you're just not going to beat the Cavs if LeBron he makes four threes in a game, which is his season-high. The Cavs did lose two games in which James hit four, but both were on the road, one was a game without Kyrie Irving in Houston and the other was in Miami (maybe just too much fanfare?). I'm totally open to alternative perspectives on this, but if his one weakness turns into a strength your entire defensive scheme is just going to be in shambles.

Unfortunately, he shot 4-for-9 from three, 11-for-16 inside the arc, and 8-for-11 from the free throw line for 42 points in his one game against the Warriors this season. That was a game in which Kevin Love was playing, which makes things a bit different, but I strongly recommend watching how James got those buckets before too easily dismissing that data based on Love's absence in the Finals — so many of those were one-on-one plays on which you could've put four random GSoM staff members at the 3-point arc and the defense wouldn't fare much better (defensive three seconds in mind).

First, here's how the Warriors were defending him on non-transition attempts (as defined by me) in that game:

Performance of Warriors defenders on LeBron James on 2/26/15.

A couple of things that stand out there:

After I went through that, I realized that I didn't take down times but more important than the sequence of the shots might be just an overall look at the second time: you can see the fatigue in his second half shot chart. 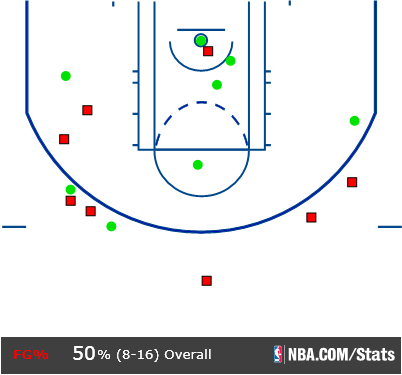 LeBron James' second half shot chart against the Warriors on 2/26/15.

Ok, so 50% shooting from the field is still pretty good. But nearly half of those shots were threes that I'd argue he settled for (including that one from a spot only Curry should shoot from) and he made just 2-for-7.

Am I grasping at straws for positives a bit? Possibly.

But the point is that after shooting 77% on all those jumpers in the first half and getting to the line so much, they mixed up the defenders a bit more in the second (that's when Barnes and Thompson got their shots) and were able to do a bit better from the field while only allowing two free throw attempts.

If you can get LeBron to settle for jumpers and find a way to weather whatever storm comes, you're in good shape.

Speaking of that spectacularly awful finish last February — seriously, I give any human being that shot 10 times out of 10 and live with the result — one thing that worked for the Heat against the Warriors was a rather simple (or simplistic?) five-out play, which Coach Nick of BballBreakdown described well.

Yes, it was a different team, but Prada actually does a good job of explaining how what Coach Nick highlights about the Heat is relevant for the Cavs.

...that (Spurs box-and-1 style) defense was uniquely suited to beating the Heat because they put shooters around LeBron and rarely crashed the boards. James got his points this way, but nobody else did.

The Cavaliers present an entirely different problem. They lack perimeter-shooting big men with Love injured, but have multiple players that can duck in to take advantage of their men shading to James. Thompson in particular has terrorized the sensible plans that the Bulls and Hawks used to limit James' shooting efficiency, by sneaking in front of them and seizing loose balls out of his zone.

A disciplined defense will be able to address this problem and even if they were to get burned by that in one game, I have every reason to trust that the Warriors coaching staff will adjust quickly enough. But the Cavs also have every reason to believe that spacing the court with rebounders will be effective for them as well, to Prada's point: you have to stay close enough to guys like Tristan Thompson that he can't fly into the paint for o-boards. And Timofey Mozgov has been impressive as a rebounder as well.

I know — this is a different roster with a different coach than last year, but the principle still holds. LeBron is deadly in iso post-ups. Coach Nick recently invited Adam Turner on to his channel to discuss exactly that and it's worth a watch heading into the Finals.

Turner makes an important point that Prada also made: smaller defenders (Barnes, Iguodala, Thompson, and Shaun Livingston) will get absolutely punished simply because they can't match that power. So yes, the Warriors have a number of defenders, but he's going to make those guys pay for being small.

3. The pick and roll

Anyone else notice that you can run pick and rolls with James and...well...like, anyone...and get results? Whether Mozgov or Greg Oden as the screener, all LeBron really needs is space and he can make something happen. Or how about the pick and roll he ran with Norris Cole...in which Cole was the screener from the right side and LeBron drove left to score over Draymond Green, who spend about half a second too much trying to negotiate and oncoming screen back on January 2, 2014 (scroll to the 1:55 mark in the video below).

You may recall that the Warriors won that game in which David Lee (!!!) had 32 points and 14 boards to complement Curry's game-high 36 points. LeBron had a more pedestrian 26 points on 10-for-16 shooting to go with five assists, but you'll see how many ways he was able to use the pick and roll effectively — let's not harp too much on the absence of Love here (who is woefully underutilized on that roster and I still want in a Warriors uniform). The guy can be deadly simply because even in a pick and roll he's ultimately drawing the attention of two defenders and can beat just about anyone in the league trying to recover from a screen.

Nevertheless, I found it interesting that the Heat used more of that five-out style offense in the following game that they won and it's hard not to think that the Cavs should utilize iso sets if the Warriors choose not to double to force them to think about the decision.

In the world of the internet we have short memories and people like to exist in a world where the past is totally irrelevant. But it was just a year ago when Shaun Livingston, then with the Brooklyn Nets, was a key contributor in defending LeBron in last year's playoffs — Zach Lowe even described him as "the preferred option on LeBron". JJason Schott of BrooklynFans.com described Livingston's defensive performance in more depth, but I think Tom Lorenzo of SB Nation's Nets Daily summed up Livingston's defensive value against LeBron most succinctly in the Q&A we had with him here last July shortly after the Livingston signing: "Of course, there isn't a tougher guard in the NBA than LeBron, and it wasn't as if Livingston shut him down, but he was able to disrupt, especially with his length.... it's all about length with Livingston, whether it be challenging jumpers or disrupting the passing lanes. He's movable, which is due to his small frame, but he can still challenge on defense because he has such a large wingspan."

Obviously, the Warriors have other options for LeBron — he'd be fifth of the five options Prada listed, in my opinion. But, as Lorenzo mentioned, you're not going to defend LeBron without help and that makes having options all the more valuable.

At the very least, it means we won't have to see more of this:

I don't think the LeBron can win a series against the Warriors by himself (or at least I hope not). But the point of this look back at past Warriors' defensive performances against him is that there are numerous ways that he can pick this defense apart and win a game or two by himself to push this series to six, despite the many prognostications of it going less than that. Add in a big game from J.R. Smith here or there and the Cavs have a real shot in this series.

The bottom line is that LeBron is such a threat that you can't count him out if he's on the floor. He's likely to make this series interesting all by himself if the Cavs staff can push the right buttons and make the right adjustments.

For more on the Warriors bid for a title, check out our 2015 NBA Finals section.