Warriors vs Cavaliers Game 2 preview: There’s still work to be done in the 2015 NBA Finals

After getting all the jitters out of the way, the world is about to witness the Golden State Warriors' explosive style of basketball in the open court in Game 2 of the NBA Finals. It’s going to be a wild Roaracle tonight!

Share All sharing options for: Warriors vs Cavaliers Game 2 preview: There’s still work to be done in the 2015 NBA Finals

There’s still work to be done.

The Golden State Warriors lead the 2015 NBA Finals 1-0 after an exciting overtime win on Thursday over the Cleveland Cavaliers. LeBron James and Company look to bounce back without their star point guard Kyrie Irving, who is now out for the series with a knee injury.

The Cleveland Cavaliers: LeBron James is looking to make a big statement tonight and steal a win in Oakland despite losing Kyrie Irving in Game 1. James might be the man to pull off an upset tonight, especially with a 2015 playoff-high 44 points in Thursday's loss. With two of their key players out (Irving & Kevin Love), the Cavs are looking for LeBron to have a big night and contributions from the team all around.

Cleveland's also going to have to worry about the noise level in Oakland — I was at the game on Thursday and I can't explain how hype the crowd was, even when we were down. Cleveland's still a tough team and I'm not counting them out just yet.

The Golden State Warriors: Just get the job done, fellas. The media noise, the nervousness... it's all out the window from here on out. Just get a win and try to close it out in Cleveland. With Marreese Speights back in the lineup, Golden State has a Full Squad again. If we can avoid a repeat performance of Game 1's slow start and make things happen early, the Warriors definitely can add another W in the series. 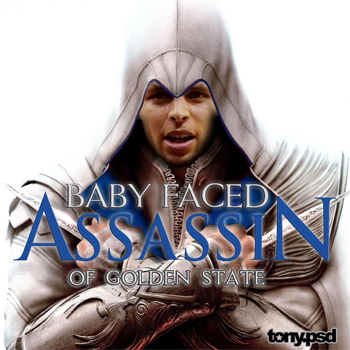 It's been a pleasure writing my first NBA Finals game preview! Nine years with GSoM and years on top of years of sucking lol.

Mama, we finally made it! - Tony.psd

See ya' at the Roaracle!