I remember hitting up Draymond Green on Twitter for a Q&A in his rookie season and here's what he had to say.

Sometimes, all a player needed was more opportunities to showcase his talents. When David Lee went down with a hamstring injury that forced him to miss the beginning of this past season, it became the perfect chance for Draymond Green to step in and display his untapped potential.

As a sophomore in the 2013-14 season, Green only averaged 21.9 minutes as Lee's backup. Nevertheless, his tenacity and hard-nosed defense was among the elite. Per Basketball-Reference.com, Green had the fifth-best defensive rating and the third-best defensive box plus/minus in the NBA.

Green's game has evolved since his rookie and sophomore years. He's an underrated playmaker, solid rebounder, and phenomenal defender who plays with passion and hustle. The addition of a more consistent three-pointer to his repertoire kept defenses honest and gave the Warriors' excellent spacing in offensive sets.

Evidently, Green developed an effectively defined role on offense provided the heat maps of his rookie year (2012-13) vs. this past year (2014-15) via NBAsavant.com. Instead of taking shots from various areas, his points came from mostly drives, pick-and-rolls, put-backs, and spot-up threes. 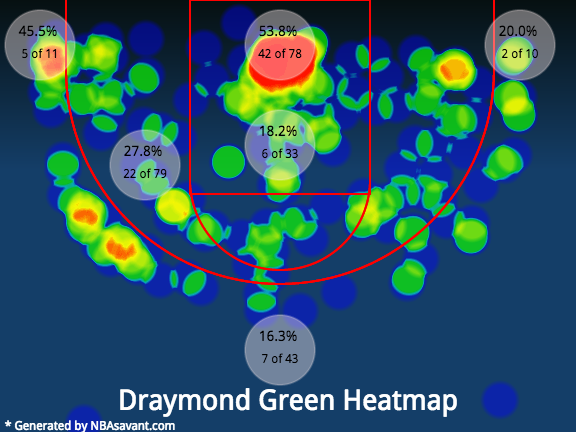 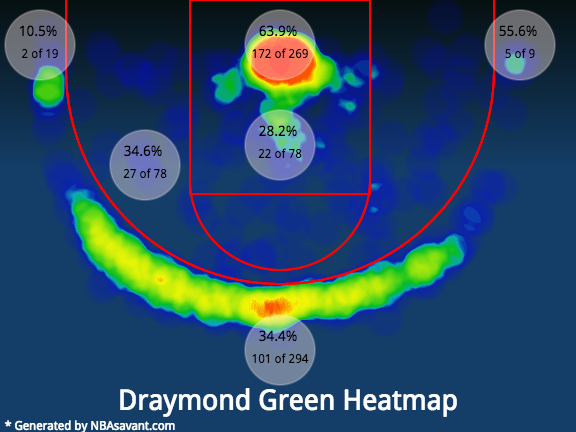 Consistency was key for Green, who was arguably one of Golden State's most important players. Taking on an expanded role, Green took his talents to higher levels on both ends of the floor. He finished runner-up in Most Improved Player voting and a case can be made that he was snubbed in Defensive Player of the Year balloting. However, that didn't stop him from headlining the NBA All-Defensive First Team. Furthermore, Green had the 15th most popular NBA jersey.

Green has refined and developed new elements to his game every season. He set multiple career-highs in a phenomenal season and earned the starting power forward job. Once considered an energy guy off the bench, Green proved to be one of the most versatile weapons in the NBA and resembles the playmaking four that execs are searching to add to their team.

The Golden State Warriors selected the Michigan State Spartan forward in 2012 knowing that he was something special. His value as a do-it-all type of player cannot be understated. In an era of rising sports analytics, Green's impact is derived from advanced metrics as opposed to basic statistics.

Draymond Green is a multi-dimensional athlete and the 'heartbeat' of the team. He will get a massive raise next season and all fingers are crossed it is with Golden State.

The Warriors hope to swiftly agree on a new contract with Green, a restricted free agent who has generated interest from rival teams. He is eligible for a max deal starting at $15.8 million but isn't concerned with milking every penny he can get as he is winning which is great news for Golden State.