Following basketball and life in an emoji-filled world

Emojis have helped shape many modern-day events, but distilling meaning into wordless images is as old as humanity.

Share All sharing options for: Following basketball and life in an emoji-filled world

Two days ago, Hillary Clinton tweeted out the following:

How does your student loan debt make you feel? Tell us in 3 emojis or less.

Our country currently has around forty million people dealing with student loan debt, seven million of whom have defaulted on their loans. Forget the 40 million, as that number is almost beyond comprehension.

Imagine Los Angeles, with its sprawling freeways, palm trees, beaches, and insufferable Lakers fans. Now imagine Chicago, with the hallucinogenic bean, the lake, the wind, and the skyscrapers. Now imagine some unholy amalgam of those two cities existing together within the confines of an endless, cavernous, drab Sallie Mae super-building.

That is your seven-million-strong default.

The total money owed? 1.2 TRILLION dollars. When we get into trillions, the numbers start to boggle the mind. Trillions, terabytes, pterodactyls, they are all of equal fantasy. 1.2 trillion dollars is just bat shit crazy.

You know who else is bat shit crazy? Steve Ballmer. You know what Steve Ballmer bought? The Clippers. For 2 billion dollars. 2 billion sounds like a whole lot of money, and really it is, until you realize that 1.2 trillion dollars is equal to six hundred Clippers teams. All the ball boys, basketballs, gyms, arenas, celebrity sightings, and unfortunate Donald Sterling memories. All that, times six hundred.

Anyways, this is all to say that two days ago, when Hillary Clinton made light of this enormous issue by tweeting "How does your student loan debt make you feel? Tell us in 3 emojis or less," people were not pleased.

.@HillaryClinton You know what people who went to college can use? Words.

@HillaryClinton the billions owed in student debts comes down to a conversation of emojis? wow.

And really, who can blame them?

But, this is not (I repeat: NOT) about politics.

This is about emojis.

Ever since humanity has become sentient, we have yearned to distill meaning into small symbols. Before the codification of speech into words, there were paintings. Cave paintings. Running horses. Monsters and demons. The things of the night.

As we progressed out of the muck, out of the caves, and into the skyscrapers and monuments of the modern day world, we never quite outgrew our love of the symbol. Our love of the simple distillation of meaning.

The Houston Rockets, trying to make a joke as time wound down in a playoff series, tweeted this to the Dallas Mavericks: 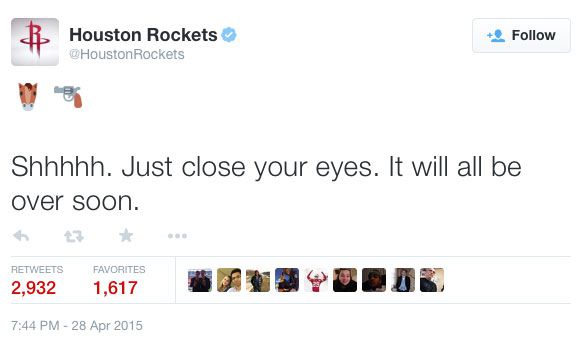 The internet, that fickle mirror of our self indignation and superior morality, exploded. Houston fired the guy responsible for the tweet.

And then, ahh, the great emoji battle of DeAndre Jordan.

We all remember it well.

In both cases, the emojis had more power than any words the athletes could have uttered. Chandler Parsons tweeted out a picture of a plane, because he was flying into Houston to try and talk to DeAndre. If he had just tweeted something like,
"Hey, DeAndre, I'm on my way! Please don't change your mind!" it would not have gone nearly as viral.

That is the power of symbols. We overlay our own hopes and dreams and fears into the images. When someone actually says something, we are forced to confront their words at face value. But when they use an image or a symbol, we are left wondering as to their intentions, and our imaginations run rampant.

Perhaps therein lies the source of indignation with Hillary's tweet.

Trying to distill 1.2 TRILLION dollars of debt into three emojis is like trying to explain the cause of the Civil War using nothing but a handful of Honey Nut Cheerios. No words. No nothing. Just hold out your hand full of cereal and raise an eyebrow, like, "Seeeeee?"

The issue of our debt requires the use of words. Many, many words. When you start trying to oversimplify an issue using images, people panic. Oversimplifying using discourse? Totally acceptable! But using a simple symbol to represent a complex issue is tricky, and will most often backfire.

Trying to distill 1.2 TRILLION dollars of debt into three emojis is like trying to explain the cause of the Civil War using nothing but a handful of Honey Nut Cheerios.

Whether in the NBA, in politics, or in the drudgery of the everyday, life is always more nuanced than we wish it to be. However much we yearn to simplify things -- to be able to speak and move as efficiently as possible -- the reality is always harder.

Emojis, memes, and simple images have the ability to infiltrate our day and seep into our thoughts.

While Hillary's tweet was being mocked and parsed, a courtroom drawing of Tom Brady was being endlessly photoshopped and retweeted. With good cause, too.

He looks like a haggard sixty-year-old drifter who has seen the pit.

It's hard to find meaning while swimming through the endless torrent of rushing internet content. There's just too many symbols, cat pictures, and Tom Brady memes. That's the world we live in.

Again, Hillary's tweet, the subsequent indignation, and the rest only happened two days ago. And yet, I was hesitant to even write this piece because I felt like the news might be too old and tired. Two days is a long time out here in internet land.

And really, we missed an important step. Missed a chance to take this thing full circle.

Which one of y'all is going to reply to Hillary's stupid student loan tweet with the Brady court drawing face three times?

An extremely important update to this story, from our very own {artist formerly known as) joeybw87 aka WeBeChampionship: