I've seen a few folks asking when Festus Ezeli is due to return in the threads lately. While there is no definitive date, he is scheduled to be re-evaluated this upcoming week. Technically, he will be 6 weeks removed from his knee surgery on Monday, 03/21, though whether that's the actual day he'll in fact be re-evaluated is unclear. My best guess is it will happen sometime during that week. Perhaps we can look at the upcoming schedule for help. 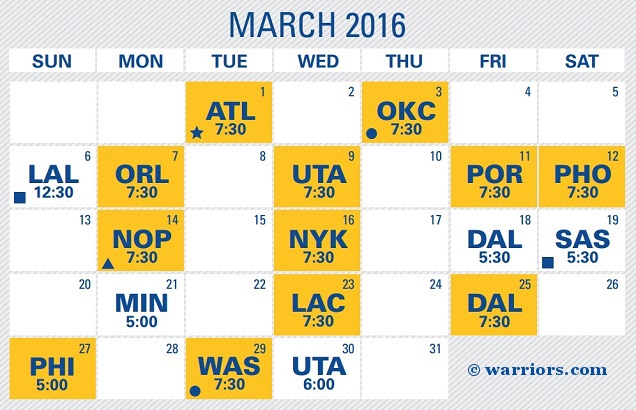 As you can see, the Warriors will be on the road @Minnesota on March 21st. While Ezeli could be re-evaluated that day, it seems unlikely that he would be given that the team will be preparing for the last game of a road trip. Beyond that, the game has a 5:00 PST start time, which leaves them with 2.5 hours less than they'd normally have. Given all of this, I think it fair to assume that he likely won't be re-evaluated until the team returns back to the Bay for the start of a 4 game homestand. Even then, there's no guarantee that the re-evaluation will lead to Festus' return, but this is where we can turn to twitter for help.

6 days ago, Rusty Simmons tweeted this:

About two weeks before his scheduled re-evaluation on his knee surgery, Festus Ezeli is getting in pregame work. pic.twitter.com/PDgZLmUocz

It's nice to see Festus getting in some work on the court, but it's just that...a picture.

That same day though, KNBR tweeted out a link to an article, which was somewhat more detailed:

In the article, Kevin Jones wrote, "The Warriors’ timetable for Ezeli remains the same and he will be reevaluated two weeks from now, with Steve Kerr hopeful the big man can return by late March. 'He’s on track to come back,' Kerr said."

And then later that day, Monte Poole tweeted:

So, if we try to piece together this puzzle, it would seem that 6 days ago Festus did some shooting for the first time in a month, then participated in pregame drills before the game against the Utah Jazz, and just yesterday "looked good" and "worked out hard." It would seem that his re-evaluation should go swimmingly, but there's never any guarantee of that.

As for when his exact return will happen is anybody's guess, but one of the home games against either the Clippers on the 23rd or the Mavericks on the 25th look like a good bet. The Warriors will likely be looking to keep their home winning streak going and having another player (and big) like Festus can only help to that end, especially with Andre out for the near future.

UPDATES SINCE THIS WAS WRITTEN

Iguodala, Ezeli and Looney won't be on the road trip. Staying home to rehab

Festus will stay behind for the upcoming road trip. This is not surprising.

It seems that he'll be re-evaluated on Monday after all, even with the team on the road in Minnesota. I suppose Kerr & Co. will make a decision upon their return to the Bay.

How badly do you want Festus to return?