For the past two years, any living soul with an ounce of basketball sense knew that the Cleveland Cavaliers would be in the NBA Finals. Under the leadership of LeBron James and aided by the skills of Kyrie Irving and Kevin Love, the Cavaliers roster was unmatched by any team in the Eastern Conference, even when Irving or Love was injured. Aside from brief 2-2 scares versus the Chicago Bulls in 2015 and the Toronto Raptors in 2016, the Cavaliers have swept every team in the last two NBA Playoffs.

And then there are the Golden State Warriors. In 2015, fueled by Stephen Curry's first MVP season, the Warriors won the Western Conference for the first time in 40 years, but were constantly doubted by critics claiming that a team could not be successful using the 3-pointer as an offensive weapon. Their 2015 championship win was considered fraudulent by many in the basketball world: the Cavaliers were injured, LeBron was aging, a "real" championship team from the 90s would never have lost to the Warriors. The Dubs responded the following year in incredible fashion, winning a record-breaking 73 games while Steph burned down the league on his path to becoming the first unanimous MVP. But even then, the postseason in the West was not as smooth as the journey in the East. The Warriors were forced to surmount an incredible 3-1 comeback against Kevin Durant and Russell Westbrook (and the Oklahoma City Thunder) only to experience the reverse in a 4-3 loss to the Cavaliers in the Finals. In comparison to the Cavaliers, the Warriors have been anything but an assured presence in the championship series.

There are obviously many reasons as to why. The West is simply more competitive. In 2015, all but one team entered the Western Conference bracket with 50 wins or more; in contrast, only three teams in the East could claim to have done the same. The year after, it was 4 in the West to 2 in the East (the Toronto Raptors were the non-LeBron team). The other is the teams themselves. LeBron has been the established best basketball player in the league for a long time. Steph, for all his talent and skill, only truly entered into his legendary form two, maybe three seasons ago. It would make sense for the sports world to find criticizing one of the two easier.

A one-seed vs. one-seed in the NBA Finals is actually not as common as one would think. Since the NBA-ABA merger, only 13 of the 40 NBA Finals have been a 1 v 1. The more famous matches include the Lakers-Celtics in 1984, 1985, and 1987, the Bulls' three titles from 1996 to 1998, Kobe Bryant vs. the Celtics Big Three in 2008, and of course, the infamous 3-1 2016 NBA Finals between the Dubs and the Cavs. As a reminder, the Hawks, not the Cavaliers, were the number one seed in 2015. Therefore, by this statistic, a Warriors-Cavaliers is not as inevitable as one might think, even if both teams do win their conferences as expected.

But, in my humble opinion, there are other reasons to believe that the dream tiebreaker series may not occur. The Warriors have created a 'Big Four' with their acquisition of Kevin Durant and have amassed offensive firepower unprecedented in the history of the NBA. Despite this, the Warriors have unfortunately proven that they are still mortal on an off night. Yes, the team is still gelling and yes, the Dubs have dished out what can only be described as shellackings on some of their opponents but if the Warriors cannot bring their best basketball against an opponent who plays firing on all cylinders, yes, they can lose. The Western Conference still poses incredible threats in the Rockets, the Spurs, and the Clippers. By no means am I claiming that the Warriors losing is a probable outcome; but it definitely does not rely on a catastrophic event or a completely unreasonable upset. 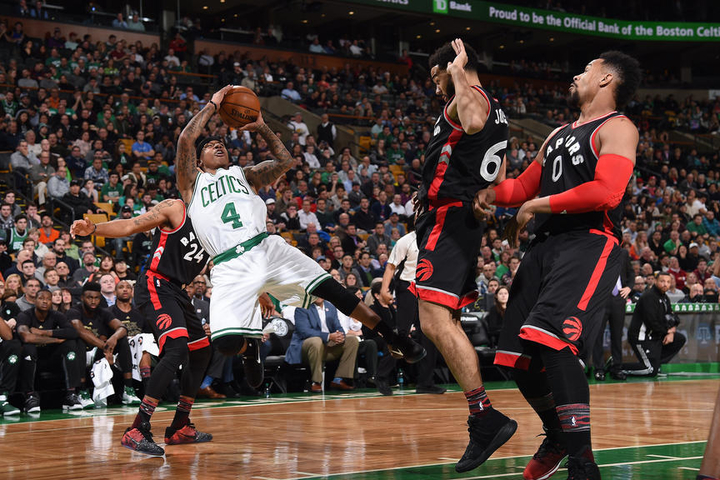 As Isaiah Thomas continues to rise, the gap between the Cavs and the East shrinks.

The Cavaliers do not have a guaranteed path to the Finals either. For the first time in their reign, the Eastern Conference can pose some threats. Isaiah Thomas is ascending, in a pseudo-Steph manner, into a league-wide noteworthy star, and the Boston Celtics sit only 2.5 games behind the Cavs. Similarly, DeMar DeRozan and Kyle Lowry are putting up career numbers with the Toronto Raptors. Finally, John Wall and Bradley Beal seem to have figured some backcourt magic out and the Wizards are hanging out in the top 4 (at least for right now). But just like with the Warriors, it does not seem probable that any of these 3 teams can finally topple LeBron James and the Cavaliers. After all, the playoffs are made of 7 game series, which means putting up 4 games of a team's best basketball. It insulates teams from one-off upsets. However, it doesn't prevent them.

At the end of the day, I'd still put my money on seeing Golden State and Cleveland in the Finals (and in case if you're curious, Vegas would agree). If there is one thing to remember, though, it's that the previous year has been full of unexpected results and crazy happenstances. Success should not be taken for granted, and I'm not calling for everyone to start doubting these two teams. I'm just reminding us that the Warriors will need and deserve every ounce of support we can muster.