A couple hours before Game 4 of the NBA Finals, I was trying to see if I could make Stephen Curry dunk a falafel ball.

I just got my hands on DALL-E Mini - an image generator that uses artificial intelligence to turn any prompt you feed it into reality. It’s a public, lighter version of the full-scale DALL-E 2, which is still in private beta. If you go on the parent company’s website, you’ll see what the real deal is capable of. 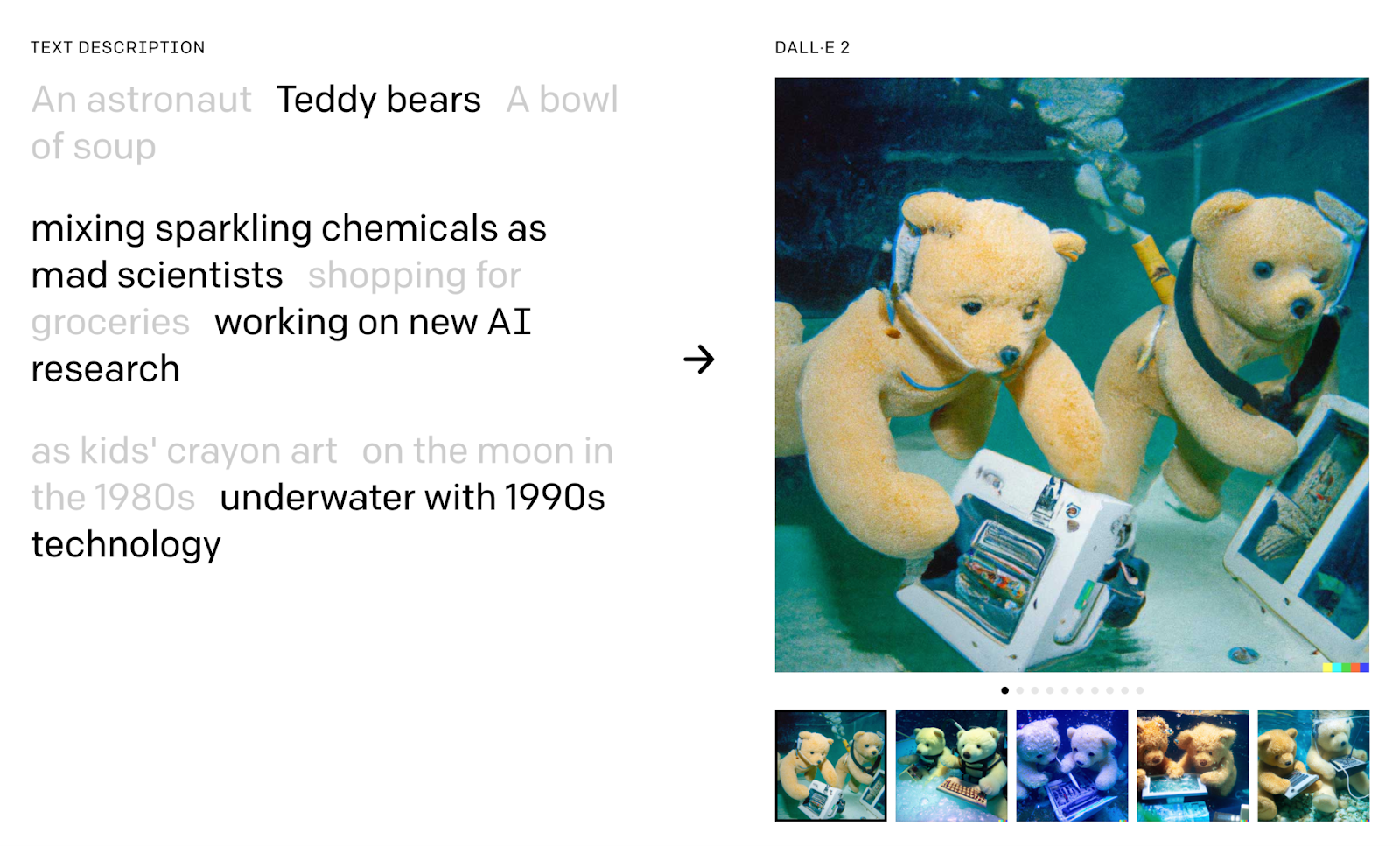 DALL-E Mini is the rookie Jordan Poole version of DALL-E 2 - still impressive with loads of potential, but for the time being, young and error-prone. It crashes frequently and the images, for the most part, were terrible. It could manage a Bichon riding a scooter while smoking a cigar and it could manage Elmo chugging a beer on a skateboard, but it couldn’t manage Steph Curry dunking a falafel ball. 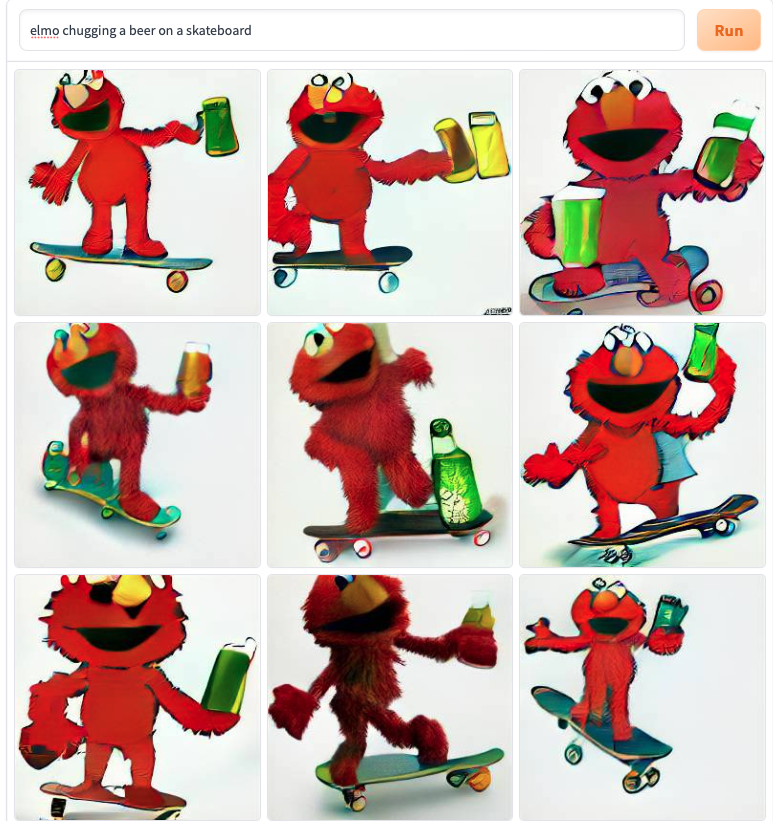 I’m not an expert on AI. I just want to see my wildest and silliest thoughts come to life. I can make that happen with my words but my nonexistent visual abilities limit me from making it happen in images. My handwriting is so bad that my high school bio teacher said that it looks like a spider dipped itself in ink and scurried across the page. I photoshop like a Boomer. I see somebody that can doodle prettily or write legibly and quickly, and I feel like I’m looking at LeBron James dunking a basketball right in front of me. I’m seeing another human being do something so easily that my body could never allow me to do my entire life.

DALL-E 2 promises a world where I’m not limited by my inability there. If I have the idea, DALL-E can bring it to life. The only two things limiting me now would be the program’s technical capabilities and my imagination. It opens up the floor, and now there’s no such thing as a bad shot, because the ball is going in. The Bichon is getting drawn, and so is his cigar. 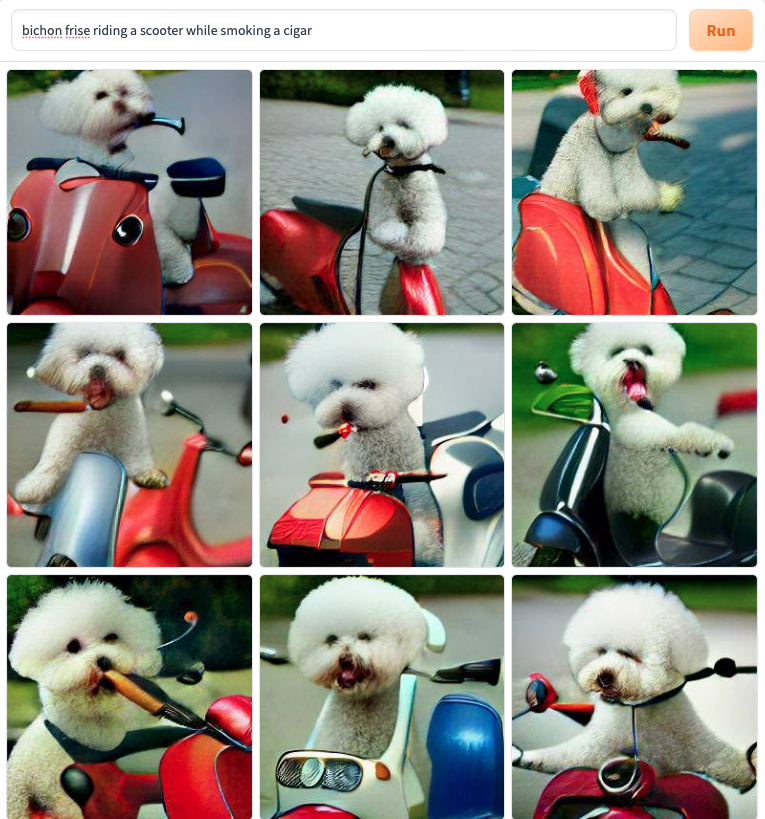 After messing around with DALL-E Mini for a little while, I "continued on with my day" as tip-off drew nearer. I kept refreshing Twitter so I could read more about the possible adjustments and predictions because I so badly wanted a sense of control over this stressful situation. As a fan, you feel that pressure in an altogether different way, and right before the game, your brain is just percolating through all these hypothetical scenarios.

Do you play Kuminga and Moody? Do you bench Draymond? Can Poole go off? What about Klay? Do you run nonstop pick and rolls for Steph? Can Steph drop 40? Will it be enough?

But then the game started.

The first image seared into my memory begins with just grasping the sheer power of the home crowd. Every single fan in the stadium is screaming their heads off at Steph Curry and his teammates, and all those pre-planned scenarios come crashing on the rocky shores of reality. The game clock starts ticking and with every bounce of the basketball, the WARDELL-E 2 starts generating his image of how the game will go.

All I wanted to do, thousands of miles away with no actual control of the situation, was to type in "Steph hits a 3 in their face" into a real-world image generator and let that rip through the universe.

It took until late in the first-quarter, but Steph brought it to life. He hit that 3 and then another and started roaring, and that’s when you knew that this game was no longer limited by human inabilities. Stephen Curry was there to hit shots at every level, feeding off every ounce of the pressure and chaos and negativity, and imposing his will on the Will Huntings of TD Garden.

That only made everything more stressful, as the game went on. Because the better he played, the more disappointing it would have been if they lost. You look up mid 4th quarter and realize that he has 30 points, and you start doing the math in your head. He has 30 and there’s eight minutes left…

You get to the last five minutes of fourth quarter and after going up and down all game — oscillating between tearing your hair out at Klay’s shots and then high-fiving the room at Klay’s shots — and the tension has risen like the apex of a house DJ’s set, the drums of legacy and the loudness of the stakes beating hard on the moment, the score, the situation. This is winning time. Five minutes left, every possession matters. Every bounce writes another beat to the scene, every movement brings us closer and closer to the resolution of this conflict.

At this point, the stress broke through my emotional ceiling and I felt something in between numb and calm. As a fan of any great athlete that’s writing their narrative in front of our very eyes, this scenario is the dream. Somebody had to take over and win the game, and this was the opportunity to have a first pass at the history books.

And when that athletic hero of yours is Steph Curry, you feel like you have the awesome powers of DALL-E at your team’s disposal. You feel like at any given frame, before any shot, before any possession, you can just type in words in your head into a generator and Steph will do it, live. You can say, Steph crosses up three defenders and hits a fadeaway three.. and he does it. You can say, Steph drives and kicks it to himself using Gary Payton II, and he does it. I can't stop watching this clip.

You can say all that and throw a caveat at the end — in the fourth quarter, under pressure, with a contest — and he still does it. You’re not constrained by any physical reality past "6’3, 200lb, subpar vert" because every other variable is maxed out. Shooting, dribbling, passing, playmaking, strength, focus, leadership, defense — all elite, like hand-writing a complicated multiplication problem and then seeing a machine do it in the blink of an eye.

Steph Curry is doing to basketball what DALL-E 2 will do for creativity. Aesthetically, if you look at Steph play basketball as a non-basketball fan, you see a guy that’s more skilled and crafty than anybody else. He’s winning by doing something you and I could do — make the right dribble ahead of the defender’s wrong move, step into the right space where the defense isn’t, and shoot the basketball. Bernie Sanders, a ten year old, and Air Bud can all shoot a basketball.

The video is strangely hypnotizing

Over the past ten years, the game has evolved in his direction. The largest humans on the planet have been rendered unplayable if they can’t shoot at least better than Bernie Sanders. A former MVP who once averaged a triple-double for the entire season can tank a championship-caliber team by virtue of shooting the basketball like it’s a forbidden vice. The game of basketball has become more skillful, as being an artist with the ball has gone from an employable trade unto itself to the table stakes requirements for getting on the floor.

It brought the game closer to its core: the purity of shooting and dribbling and passing and moving rather than drawing fouls or fighting in the trenches.

I see a similar dynamic with something like DALL-E, where creativity isn’t constrained by this finite skill. I don’t need to commission an artist to draw my favorite basketball player dunking one of my favorite foods. It’s a purer world when ideas, concepts, and original thinking can win out over these physical constraints. DALL-E 2 can’t replace the ingenuity and originality of actual, human artists — much like 3-point specialists and pure shooters still have a place in the league, as Buddy Hield is making as much as Aaron Donald — but it can open up the artistry for folks that have never had access to these physical movements before. DALL-E 2 won’t change an uncreative, unoriginal mind, much like Steph Curry isn’t actually making anyone shoot better. But when both expand the limits of what’s possible, you’ll see more people raising their games and maxing out their variables.

And now you have kids pulling up from 40 feet at 5th grade church games, and you start wondering if maybe the tech’s gotten too advanced. You weigh that against the explosion of skill and talent coming up in the league — from the Luka Doncics to the Trae Youngs to the Victor Wembanyamas — and it’s a more complicated debate than I can give it justice.

The joy of creation, and the joy of sports, comes from the body and the mind working together in tune, a flow state of expression as one turns their imagination into a reality. DALL-E 2 bridges the gap between mind and body while Steph Curry’s audacious NBA existence throws away the restraints on what’s possible. An NBA player winning an NBA Finals game through his sheer force of will — and he’s well under 6’6, not dunking once in 43 points.

Game 5 is coming up with Game 6 three days later — you can punch in anything from "drops 60 in a loss" to "scores 25 with 15 assists in a win" and it’ll feel possible for Steph Curry and the Warriors. He won’t be dunking anything — neither basket nor falafel balls — but the flick of his wrist is powerful enough to turn our wildest dreams into a tangible moment in our lives.

Win or lose, the debate will rage on where he slots between the game’s all-time greats. At this point, I care less if you put him above Kobe or beneath Durant or to the side of Magic — I know I put him beyond anybody that’s ever played, on his own plane in a different dimension that transcends "better" or "worse" in these binary debates. He just is, and no matter the outcome of this Finals series, I know for certain that we won’t feel this feeling of our horizons expanding before our very eyes for a very, very long time. 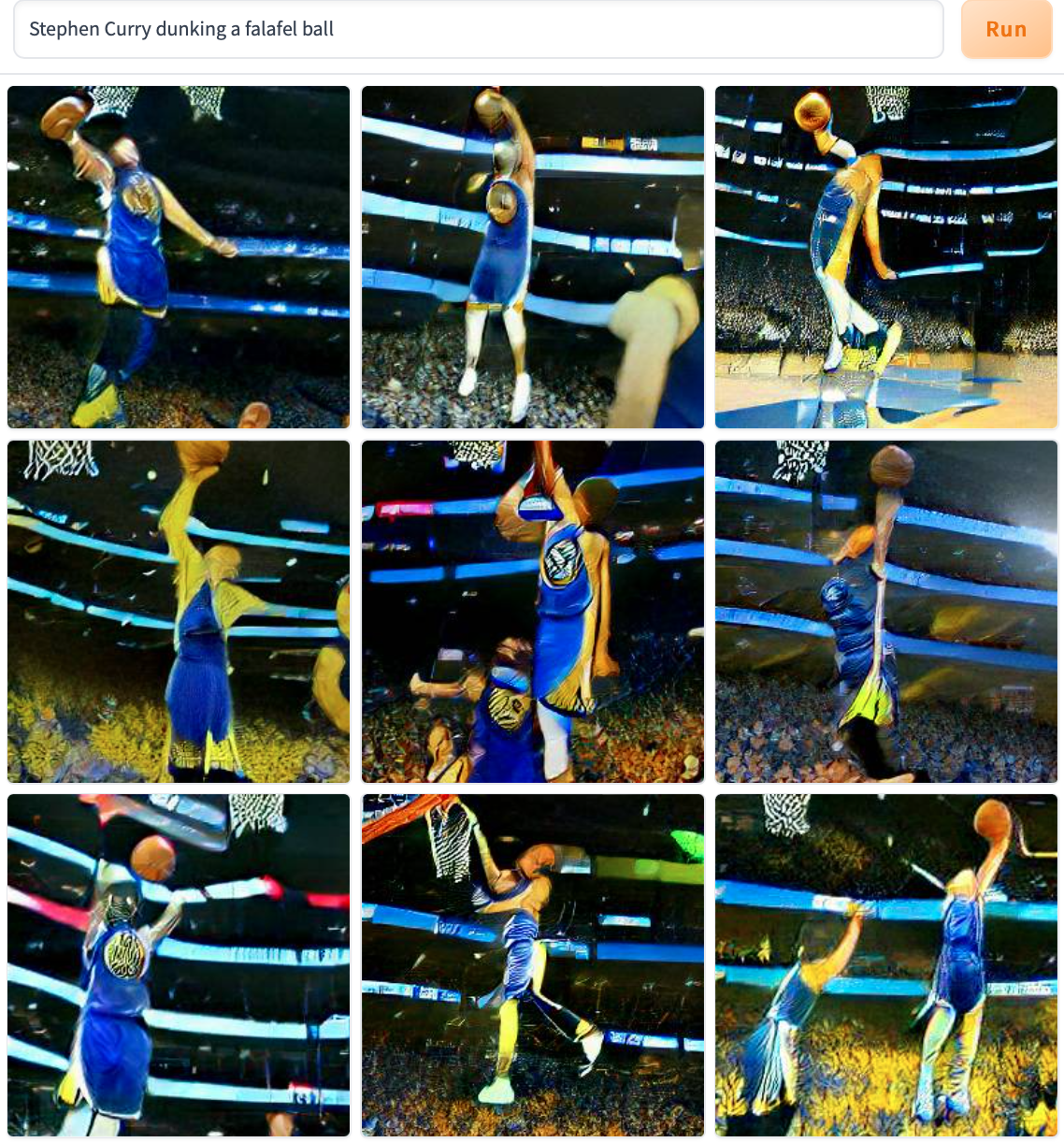