The Golden State Warriors have recalled Kent Bazemore to rejoin the team for tonight's game against the Indiana Pacers after a strong debut with the Santa Cruz Warriors.

After the announcement that he was assigned to the D-League yesterday, Kent Bazemore played last night and had a strong debut with game-highs 27 points and 5 steals.

I guess the Warriors saw enough: they recalled him today and he will rejoin the team in time for tonight's game against the Indiana Pacers.

It's hard to know what to take from that single game in the D-League, but his shot chart was interesting. 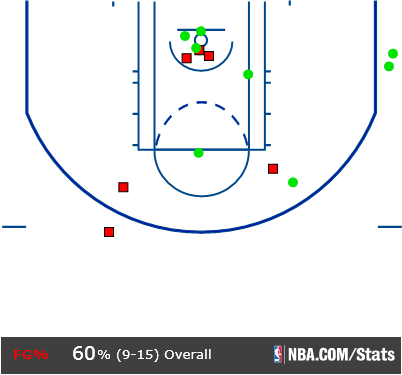 There might be two ways to look at that chart: either things came so easily to him that he was able to get to the basket at will for high percentage shots or it might be fair to say that he could work on his mid-range game if he wants to become a more productive NBA player.

For more on Bazemore's performance, check out our Santa Cruz Warriors scores storystream.