Video: Highlights from the Santa Cruz Warriors' 95-79 win over the Reno Bighorns

Jeremy Tyler has been recalled to the Golden State Warriors after contributing to the Santa Cruz Warriors' 95-79 win against the Reno Bighorns yesterday, completing a road sweep to open the season. Ultimately, it could probably be said that Tyler's debut in a Santa Cruz Warriors uniform produced mixed results.

Share All sharing options for: Video: Highlights from the Santa Cruz Warriors' 95-79 win over the Reno Bighorns

The Santa Cruz Warriors had another strong defensive game, holding the Reno Bighorns to just 29.4% shooting from the field in the game and only 23.8% shooting in the fourth quarter (which was when they let up a bit in their first game against Reno.

Tyler was unquestionably a part of that and looking at Reno's fourth quarter shot chart helps to illustrate that. 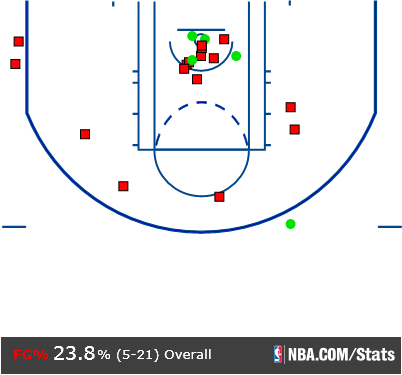 Fourth quarter shot chart for the Reno Bighorns against the Santa Cruz Warriors on 12/2/12.

Yet part of holding Reno to just 23.8% shooting in the fourth quarter was the Warriors recording five of their 11 blocks in that final period with Mickell Gladness swatting away three of them. And although Tyler didn't pick up any blocks in that quarter, his presence in the paint next to Gladness clearly made a difference throughout the game in forcing Reno players into contested looks in the paint.

The Good: Tyler's plus/minus & other highlights

The Bad: Tyler had as many fouls as points

Unfortunately, the rest of the numbers don't put Tyler's performance in a very favorable light.

Tyler finished with 5 points on 2-for-9 shooting to go with 5 fouls, 4 turnovers, and no offensive rebounds. Not exactly what we would consider a promising line for a player signed to a NBA contract on a D-League team.

In Tyler's defense, it's gotta be harder for big men to get going in a D-League setting.

The Ugly: Tyler got whistled for a technical foul after an exchange with Carl Landry's brother

With 8:17 left in the third quarter, an ongoing exchange between Tyler and Marcus Landry - Carl's brother - turned into a double technical.

At that point, the lead was at 21 points and really stayed in the 20-point range until Tyler left the game a few minutes later shortly after picking up his fourth foul. It was during that time that Tyler was out of the game - about an 8 minute span crossing the third and fourth quarters - that the Warriors lead went from 19 to 6, which is a testament to the value of Tyler's presence.

Whatever we want to say about how much a D-League performance matters for NBA potential, a technical foul was definitely not something you'd want to see from a young player whose maturity has been questioned since the moment he left high school early to play overseas. Unfortunately, the double tech was a low point of a night that featured a surprising amount of pleading with refs over fouls and talking to opponents.

Click here for the full video of the game. For more on the Warriors' D-League team, check out our Santa Cruz Warriors section.