The Santa Cruz Warriors currently have the longest active winning streak in the D-League after winning their first three games at the newly constructed Kaiser Permanente Arena. Although Golden State Warriors assignees Kent Bazemore and Jeremy Tyler have certainly made significant contributions to the team's early season success, the team's defense might be the more sustainable source of their success.

Share All sharing options for: Defense could help Santa Cruz Warriors players get NBA call-ups while winning without assignees

There's only so much under a team's control in a basketball game and sometimes a hot-shooting opponent veers beyond the sphere of influence to a point where there's truly little that can be done except trying to "weather the storm."

Although a team can contest to make the looks less open, there's a threshold past which you really do have to assume that a team simply can't stay that hot. Such was probably the case when the Springfield Armor came into Kaiser Permanente Arena on Thursday night and shot 10-for-19 (52.9%) from beyond the arc through the first three quarters against the Santa Cruz Warriors.

Lending to the theory that the Armor's shooting accuracy would eventually fade was that they're not necessarily a great 3-point shooting team - their 31.9% shooting after their trip to Santa Cruz is near the bottom of the league. And yet Springfield's hot shooting from long range could probably be considered the single most significant factor in staying in a game that seemed to be teetering on the edge of a rout at times.

Every time the Warriors made plays to push the lead closer to 20, timely threes from the Armor would keep their deficit manageable. Despite the flow of the game making it feel as though the outcome was never in doubt, Santa Cruz found themselves up by just 10 points after three quarters.

"We just want to challenge all those jump shooters and just make sure we get a hand up," Warriors coach Nate Bjorkgren told media after the game. "There were a couple of times where we didn't challenge, where it was just a free and easy look for them. And guys on their team and this league are going to knock them down if they get free looks."

Yet part of what made the Warriors look helpless to stop the Armor's 3-point barrage was that they were in fact contesting quite a few of those shots, even if Armor players were able to catch and shoot in rhythm. And it didn't help that Springfield took a page out of Don Nelson's book at time and tried to create mismatches that would yield even more opportunities from deep.

"Especially when they're playing small ball, it makes it a lot more difficult," said 6-foot-11 Warriors center Chris Johnson, who was forced to venture out to the perimeter to defend shooters on occasion. "You know you gotta keep a high hand up and try to contest as best you can. And there's nothing you can really do about it. It's just all effort."

As it turned out, despite doing all they could and discussing it as a team, the Warriors never found that bucket of water to extinguish the Armor's hot shooting and the Armor just continued hitting threes, getting even hotter in the fourth (5-for-8, 62.5%). It truly reached a point where there wasn't much that Santa Cruz could do about the 3-point shooting.

So instead, the Warriors just shut down the Armor everywhere else. 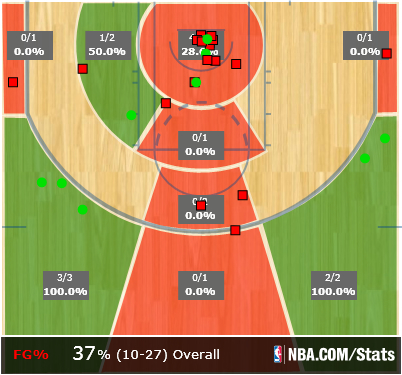 Fourth quarter shot chart for the Springfield Armor against the Santa Cruz Warriors on 12/27/12.

What should stand out about that shot chart is not so much that Springfield shot or made so many from the 3-point line, but moreso that they got next to nothing from anywhere else: they shot just 5-for-19 (26.31%) from inside the arc. Moreover, they got 11 of those shots right at the rim and simply couldn't convert. The reason is simple enough: the Warriors were contesting every shot at the rim and do so to a far higher degree of success than they were around the arc.

A large part of the Warriors' success inside the 3-point line speaks to a major strength that a large part of their success has to be attributed to: their athleticism and length in the paint combined with their quickness around the perimeter makes them an extremely difficult team to score against, even without the presence of Golden State Warriors assignees Kent Bazemore and Jeremy Tyler.

On several occasions this season, the Warriors have managed to hold opponents under 40% shooting in games and it isn't the first time that they've stepped up their intensity in the fourth quarter to close out games. For their efforts, they're held opponents to the lowest field goal percentage in the league through 10 games (38.4%) and, as a byproduct, the lowest scoring average (92.7). That's not about one or two players coming in from the NBA and dominating D-League competition; that's about a team working together well as a unit.

The addition of Johnson, who scored 13-points in the first quarter en route to a 24-point performance in just his fourth performance with the Warriors, figures to be a major part of that. While Tyler has been more of an offensive presence in his three D-League appearances, Johnson has stepped in and been a major presence on the defensive end as he tries to learn the offense. Although it doesn't show up in the statistics, Johnson's defensive awareness to change the shots of either the man he's guarding or in help situations has been a major asset.

Pairing Johnson, the 2011 D-League Defensive Player of the Year, with former Golden State center Mickell Gladness gives Santa Cruz a solid post rotation to anchor the middle of their defense and force situations like the one Springfield found themselves in on Thursday. Gladness hasn't had the kind of gaudy statistical game that Johnson had on Thursday night, but his combination of defensive ability and previous NBA experience probably won't be overlooked by those scouring the D-League for players to potentially call-up.

It's probably safe to say that most of us as Golden State Warriors are probably less than excited about the defensive prowess of the Santa Cruz Warriors at this point; aside from the fact that it's sort of weird to think about the Warriors as an organization totally committed to defense from top to bottom after seemingly being indifferent to it at least since Mark Jackson's playing days, we usually frame the D-League in terms of its potential to develop individuals rather than strong defensive units. But the development of the Warriors as the league's top defensive squad might actually pay dividends for individual players, particularly ones like guard Travis Leslie.

In a phone interview prior to the D-League season, Santa Cruz Warriors GM Kirk Lacob noted that sometimes being part of a winning team can do more for a player than, "putting up 22 on a crappy team." Coach Bjorkgren added to that the other night by making what should be an obvious point that most of the guys currently in the D-League aren't exactly going to the NBA to become instant starters. For NBA teams looking at Santa Cruz players, they're seeing not only a winner but players who are a part of an outstanding defensive unit.

As mentioned by Ryan Ripley of SB Nation's Ridiculous Upside, Leslie's "heightened focus on defense" will only help him as teams look around for potential call-ups: with NBA experience already as well as remarkably consistent and efficient scoring, being a starter on the best defensive team in the league can't hurt him. Yet as much as that should probably help Leslie, one of the top NBA prospects in the D-League, performances like Thursday night's could help post players like Gladness, Johnson, and even Taylor Griffin more: players who can protect the rim like that will always have some measure of value in the NBA.

In describing Santa Cruz as "The New Powerhouse of the D-League", Dakota Schmidt of D-League Digest wrote, "Does this Warriors team have what it takes to make it all the way to the D-League finals? Absolutely." Although a combination of call-ups and the inconsistency of Golden State assignees' availability could certainly have an impact on how easy that path is, the team's defense figures to go a long way in making them a contender for the title while also benefiting individual players' path to achieving their NBA dream.