The Santa Cruz Warriors held practice in Oakland today where Golden State Warriors rookies Ognen Kuzmic and Nemanja Nedovic were able to work out with the team while Mychel Thompson joined the team for the first time.

We've talked a lot about how convenient it is to have the Golden State Warriors' D-League affiliate so close by and today provided another example of it.

The Santa Cruz Warriors practiced in Oakland after the Golden State Warriors today, making it even easier to assign rookies Ognjen Kuzmic and Nemanja Nedovic as well as recent call-up Dewayne Dedmon to the franchise's D-League affiliate.

Although we shouldn't read too much into these assignments beyond a matter of convenience, it does prepare Kuzmic and Nedovic to play for Santa Cruz with the D-League season beginning this weekend.

Santa Cruz opens their regular season with a pair of home games on Friday and Sunday against the Austin Toros. Golden State plays in L.A. on Friday night, but returns to Oakland to face Portland on Saturday with their next game not until Tuesday in New Orleans so it's feasible that their rookies could play in that second game in Santa Cruz and rejoin the NBA club in time for the four-game road trip. And of course, their adjustment is made easier by the synergy between the organization's NBA and D-League clubs: they went through a quick walk-through of plays and were running sets that Golden State fans will find very familiar.

Dedmon has already played with both teams after playing in both of Santa Cruz's preseason games this past weekend and playing two minutes in last night's win over Utah.

"He did a good job just doing what he needs to do: playing defense, rebounding," Seth Curry said at the Oakland practice facility before Santa Cruz Warriors practice today. "I mean, he didn't really get outside of his game too much trying to make plays - he played solid. That's what he needs to do."

Also joining the Santa Cruz Warriors for the first time today was Mychel Thompson, whose rights were acquired weeks ago and, according to a Santa Cruz release, "...replaces Dewayne Dedmon on the training camp roster after Dedmon's GATORADE Call-Up to the Golden State Warriors."

Obviously, they can now begin promoting the Santa Cruz Splash/Beach Brothers in earnest now with the 6-foot-6 Thompson joining the team, but as one might expect both he and Seth Curry are at least equally interested in establishing their own legacy.

"We wanna be our own players, but if they want to call us that I'm not against it," Thompson said matter-of-factly. "But I wanna be my own player."

As described by Keith Schlosser of SB Nation's Ridiculous Upside, Seth Curry is already establishing himself as an impact player in the D-League after averaging 27.5 points and 6 assists in Santa Cruz's two preseason games. Although he says he hasn't had much interaction with the Golden State staff until today, they've been monitoring his progress and have to be pleased with what they've seen so far.

"It's the first time I've actually played the NBA style game ever, really, since I never played summer league," Curry said. "So it was good to get that NBA-type experience and I'm just going out there trying to get better."

But Thompson is an example of how long the wait for a more permanent NBA roster spot can be.

Thompson has been on the fringes of the NBA for the past few seasons, last playing five NBA games with the Cleveland Cavaliers in early 2012 and in summer league with the Minnesota Timberwolves this past summer. Yet with a logjam on the Wolves wing, Thompson didn't end up in training camp anywhere.

The D-League vs. overseas 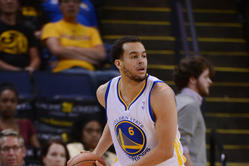 During Santa Cruz Warriors media day, Andy Liu asked player about what went into their decision to play with the D-League instead of heading overseas.

Nevertheless, he returns to the D-League this season seeing it as his best option to make it onto a NBA roster.

"My ultimate goal is to play in the NBA," Thompson said when asked about the temptation of offers elsewhere. "So, I think I'm still pretty young, I can wait a little bit longer, but yeah, they are definitely tempting."

With the decision to resist the temptations of more lucrative offers elsewhere behind him, Thompson's most immediate focus is continuing to work hard on setting himself apart on the floor.

"I feel like I'm a little more athletic," Thompson said when asked how his style of play differs from his brother's. "He's a better shooter; him and Steph, they're both incredible shooters. To be able to shoot like them, they're incredible. But I feel like my game, I'm more of a versatile (player) - a good passer, play defense. I mean, Klay's a good defender too. But I'm just trying to go out there and play hard and do little things."

The deadline for finalizing rosters is looming as the season begins on Friday. Each D-League roster can have 10 active players with two additional players on the inactive list. With Thompson being added and Joe Alexander currently injured, the Warriors will still have to make a few decisions - which might not exclude signing additional players - before the season begins.